Mike Huckabee has terrible news for Republicans: If they accept the legal reality of marriage equality, the former Arkansas governor and 2008 Republican presidential hopeful will be done with them. Not just a little done, but completely done.

Huckabee was on the American Family Association’s radio broadcast this week discussing the Supreme Court’s decision not to take up the same-sex marriage cases before them — leaving in place lower court rulings that declared those bans unconstitutional — when he made the comments in question: 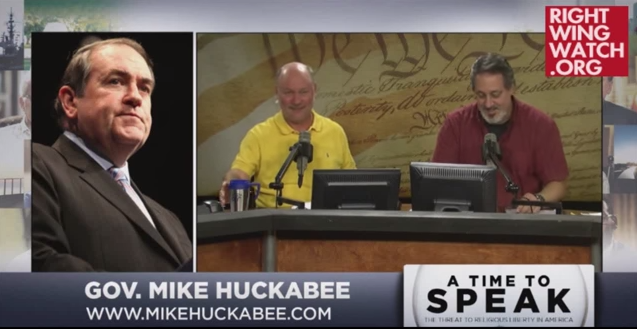 “If the Republicans want to lose guys like me — and a whole bunch of still God-fearing Bible-believing people — go ahead and just abdicate on this issue, and while you’re at it, go ahead and say abortion doesn’t matter, either. Because at that point, you lose me. I’m gone. I’ll become an independent. I’ll start finding people that have guts to stand. I’m tired of this.”

This might sound like good news for the Republican party — sure, they’d lose the hardcore “God-fearing Bible-believing” voters, but they’d also be back in step with a majority of Americans on both same-sex marriage and abortion rights. But Huckabee doubts that very much.

As far as he is concerned, continuing to fight for increasingly unpopular laws will help the Republican party, whereas moving forward with a legally compliant platform will lead to defeat. Presumably, he divines this from the same source that assures him holy war with Islam is guaranteed victory

Depriving other people of their civil rights might be important to the religious and theocratically-inclined wing of the Republican party, but not to the majority of Americans.

As we saw in the last presidential election, women’s rights and gay rights played a substantial role in how voters perceived the parties — and how they voted as a result. Aiming to deprive Americans of those rights has harmed the Republican party’s ambitions, now and in the foreseeable future. Even among those Republicans who support a blurring of the lines between church and state, there are some who have acknowledged this.

Huckabee’s guarantees, then, fall rather short, and it sounds more like typical fear-mongering than anything else: If you don’t do what (I say) God wants you to do, you’re going to pay!

Personally, I would love to see the Republican party shed its hardcore religious baggage and stop defining itself by religious ideas about who to hate, who to deprive of rights, etc. If abiding by the Constitution is all that it takes to do that… well, hallelujah! (Now if only Huckabee could promise to take Santorum with him…)

October 12, 2014
Egged On By Her Ex-Pastor Husband, Mom Attempts to Poison and Stab Three Daughters to Bring Them to Jesus
Next Post