Egged On By Her Ex-Pastor Husband, Mom Attempts to Poison and Stab Three Daughters to Bring Them to Jesus October 12, 2014 Terry Firma

Egged On By Her Ex-Pastor Husband, Mom Attempts to Poison and Stab Three Daughters to Bring Them to Jesus

Christ is a great pal, now and forever. Wouldn’t you like to meet him?

Police say that was the basic motivation behind the crime committed the other day by Pamela Christensen, an Illinois mother with end-times delusions who confessed that she had attempted to murder her three daughters.

After 911 dispatchers received two hang-up calls from the Montgomery home, officers went there and found the girls upstairs. Two of them had been stabbed in the chest by their God-besotted mom. 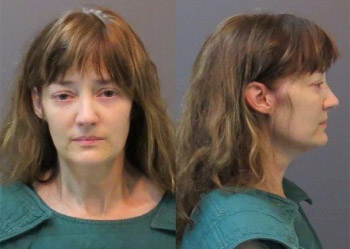 [P]olice said Christensen told officers that she was sending the girls home to “meet Jesus Christ.” The three girls, ages 12, 16 and 19, told police that their mother held a knife to them and asked them if they accepted Jesus Christ as their savior. Two of the girls were stabbed. Police recovered a poisonous liquid in the home’s kitchen, which Christensen said she had concocted out of dishwashing detergent in an attempt to subdue her children. She told police she had hoped they would fall asleep so she could stab them. Police said the children refused to ingest the poison…

The woman told officers that her husband, Vaughn Christensen, had left messages on the phone telling his wife that the world was ending, and that she needed to prepare the family to meet Jesus. Vaughn Christensen is a former pastor at a Sugar Grove church.

The three girls, who have non-life-threatening injuries, were released from a local hospital and are now reportedly staying with a grandparent.

Their parents had been going through a contentious divorce, during which Pamela Christensen accused her husband of having become increasingly “violent” and “erratic” toward her and their daughters.

Sounds like she wasn’t entirely free of violent and erratic behavior herself.

Ms. Christensen, who is being held on bail of one million dollars, is due in court on Friday.

October 12, 2014 Mike Huckabee: If the GOP Gives Up Fighting Marriage Equality and Abortion Rights, I'll Leave the Party
Browse Our Archives
What Are Your Thoughts?leave a comment