Back in May, five members of a strange Chinese cult called Eastern Lightning — a.k.a. the Church of the Almighty God — walked into a McDonald’s restaurant in Zhaoyuan and harassed one of the customers, trying to recruit her into the cult. When the woman, Wu Shuoyan, declined to hand over her phone number, the five decided that she deserved to die “because she’s a monster, she’s an evil spirit,” explained Zhang Lidong (55), an unemployed pharmaceutical salesman who led the attack. 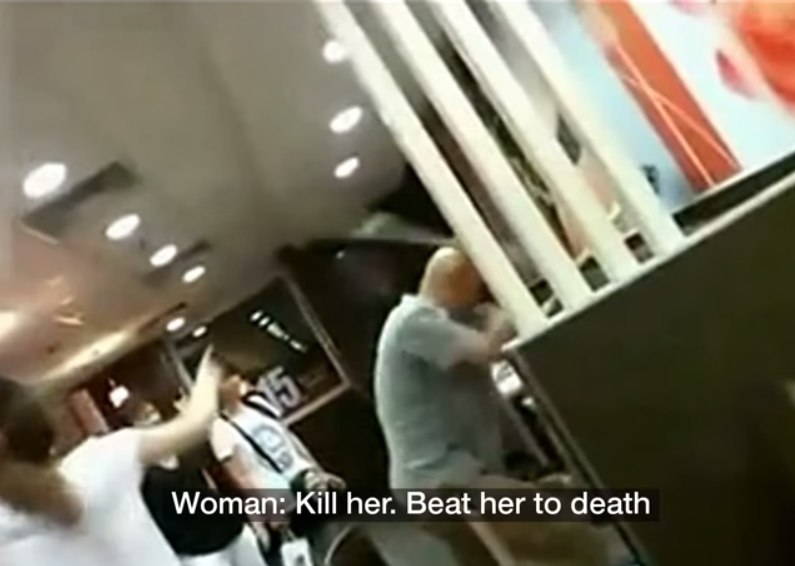 So he and his fellow cult members beat her to death with mops and chairs before the eyes of horrified onlookers. The attack was caught on video. Lidong never showed remorse, prosecutors said, instead maintaining that the victim had to be destroyed and that

“We are not afraid of the law. We have faith in God.”

During the trial, the defendants (who believe that Jesus is back and living among us as a Chinese woman who happens to be the cult founder’s wife) testified that

… they had acted in self-defense after they were attacked by the “demon’s supernatural powers”.

The court dismissed that assertion. It called the murder “extremely cruel” and on Saturday handed down the death sentence to two of the attackers: Zhang Lidon and his daughter Zhang Fan, 29. The others’ lives were spared.

Lu Yingchun, 39, another member of the murderous gang, was handed a life sentence while two others, Zhang Hang and Zhang Qiaolian, received 10 and seven years respectively. All three also faced cult-related charges.

The Chinese government (which, it must be noted, is not above exaggerating domestic threats and putting on show trials) says the Church of the Almighty God is responsible for a string of violence, including murders, mutilations, stabbings, riots, kidnappings, and torture. Authorities have dubbed the group, along with 13 other religious organizations including the much more peaceful Falun Gong, “evil cults.”

October 12, 2014
If This Iranian-Born Atheist Doesn't Get Asylum in Scotland, He Could Be Killed Back Home
Next Post

October 12, 2014 Egged On By Her Ex-Pastor Husband, Mom Attempts to Poison and Stab Three Daughters to Bring Them to Jesus
Browse Our Archives
What Are Your Thoughts?leave a comment