Brittany Maynard Will End Her Life in a Few Weeks and It’s Upsetting Many Christians October 12, 2014 Rachel Ford

On New Year’s Day, 29-year-old Brittany Maynard (below), a newlywed planning to start her family, got some awful news: she had brain cancer. After months of treatment and doctor’s visits, she received even worse news: her tumor had not only come back, but grown larger. 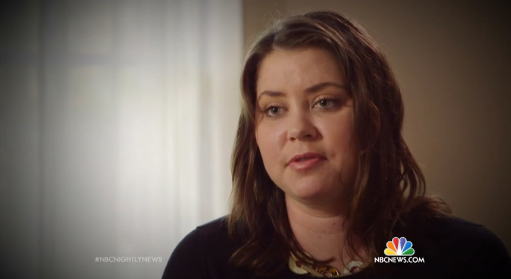 She wrote in an essay for CNN:

Doctors gave me a prognosis of six months to live.

Because my tumor is so large, doctors prescribed full brain radiation. I read about the side effects: The hair on my scalp would have been singed off. My scalp would be left covered with first-degree burns. My quality of life, as I knew it, would be gone.

After months of research, my family and I reached a heartbreaking conclusion: There is no treatment that would save my life, and the recommended treatments would have destroyed the time I had left.

I considered passing away in hospice care at my San Francisco Bay-area home. But even with palliative medication, I could develop potentially morphine-resistant pain and suffer personality changes and verbal, cognitive and motor loss of virtually any kind.

Because the rest of my body is young and healthy, I am likely to physically hang on for a long time even though cancer is eating my mind. I probably would have suffered in hospice care for weeks or even months. And my family would have had to watch that.

Ultimately, Maynard decided to choose death with dignity. Since physician-assisted suicide is only legal in five states, Brittany and her family uprooted to one of them: Oregon.

Maynard is using the time she has left to advocate for death-with-dignity protections. She and her family have gone public with her story and set up a website. This was, undoubtedly, an agonizing choice, but Maynard says that choice must be the patient’s.

I do not want to die. But I am dying. And I want to die on my own terms.

I would not tell anyone else that he or she should choose death with dignity. My question is: Who has the right to tell me that I don’t deserve this choice? That I deserve to suffer for weeks or months in tremendous amounts of physical and emotional pain? Why should anyone have the right to make that choice for me?

Unfortunately, there are quite a few people who feel they have exactly that right, saying that Maynard must let nature take its course. Or follow through with God’s plan. Conservative Christian blogger Matt Walsh, guest posting at The Blaze, goes so far as to declare her choice “the exact opposite of courage.” He can’t quite bring himself to utter the word “coward,” but he does everything short of it throughout his piece:

We are given life, we take part in life, we participate in life, but we do not own our lives. We can’t take possession of our lives like a two-year-old grabbing a toy from his friend and shouting ‘Mine!’ Our lives are bigger than that, thank God.

Walsh bemoans people’s support for Maynard and her decision, calling her a “martyr for the cause of self-destruction [in] our modern enlightened society.” He is “terrified to think that [his] children will grow up in a culture that openly venerates suicide with this much unyielding passion.” He also believes that anyone who says Maynard is brave is implying that those who choose otherwise are not.

Walsh sees no possibility that there is bravery in both scenarios: giving up your final weeks to spare your family the agony of seeing you die horribly and fighting through that agony to spend as much time with them as you can. In his eyes, if it is brave to fight it out, it must be cowardly to choose assisted-suicide, and vice versa.

In real life, however, people do very different things with the same motivations all the time. A reasonable person ought to be able to find courage in both scenarios.

While Walsh acknowledges that he is “sad for Brittany,” he sees her advocacy as “wrong. It’s all wrong. The public reaction to her choice is even worse. Delusional, disappointing, horrifying.”

Why? Because God, of course.

So if God reached out from the depths of eternity to hand us this life of ours, how can we think it acceptable — or worse, meritable — to throw it out before our time is finished?

Naturally, no evidence that God did any of these things is forthcoming; but, even so, he doesn’t explain why his God demands suffering. He just moves on to more questions… and bizarre answers:

Inevitably, that’s what this conversation comes down to. The old questions. The oldest questions. What is life? Why are we here? What’s the point of it all?

If you celebrate suicide, then you have answered these questions: life is nothingness, we are here for no reasons, and there is no point.

Again, these answers don’t follow from the questions. The answer “there is no point” is not, for instance, implied by saying, “I support a person’s right to end their life 3 months early, if those 3 months are going to be spent slowly dying, in excruciating agony.” In fact, many Christians who believe that there is a God-ordained purpose to every life support end-of-life rights. Walsh simply dismisses them:

[Those who “celebrate suicide”] scratch their heads and wonder why some of us kooky Christians get so upset about things like abortion, euthanasia, and embryonic stem cell research. For some reason they won’t listen when we try to tell them: life has value. It is a thing of value. It is worth something. It is worth something beyond our feelings about it, beyond circumstance, beyond context, beyond sickness, beyond development, beyond age. LIFE HAS VALUE.

Brittany Maynard, and those who love and support her, do not believe her life has no value. On the contrary, she has fought hard to preserve it because she values it. However, she acknowledges that it is almost over and that its final moments are either going to be peaceful or wracked with agony.

The idea that value is derived only by virtue of existence, regardless of the state of that existence, is not only foolish, but cruel. It’s the thinking that leads people to campaign against condom use in areas where AIDS is widespread or to allow women to die rather than let them terminate a pregnancy that may kill them. But you can appreciate human life as a whole and when there’s at least some quality to it. At least, most people can.

Walsh, on the other hand, says that he understands that Brittany’s life…

… is a likely short life of intense pain and inconceivable suffering. I understand the desire to avoid such a fate, but we should not act upon that desire. Life is to be lived like a cup we drink until the last drop.

He is welcome to his opinion, of course, but he does not make a compelling case for it. He claims that to factor in quality of life in a discussion about life is to uproot everything western civilization is founded on (no, I’m not exaggerating). Yet, Brittany Maynard very much values her life, as do her family, friends, and supporters. That value doesn’t necessarily hinge on surviving for the longest possible amount of time.

End-of-life decisions are difficult, and the highest ethical standards surrounding them should always be maintained and demanded. People can and do disagree on potential conflicts inherent in a physician’s involvement in life-ending decisions. But calling someone like Maynard a coward — or strongly implying it — for choosing to end her life before her brain is destroyed is despicable.

No matter how “sad” Walsh claims to be for Maynard, this is, and must be, her choice to make. And she deserves the utmost compassion and respect for facing these terrible circumstances bravely, thoughtfully, and with concern for others.

Maynard plans to end her life on November 1. It will be on her own terms.

October 12, 2014
Reza Aslan: You Can Only Be a Credible Public Atheist If You're a Religious Scholar With a Degree
Next Post

October 12, 2014 If This Iranian-Born Atheist Doesn't Get Asylum in Scotland, He Could Be Killed Back Home
Browse Our Archives
What Are Your Thoughts?leave a comment