The then-15-year-old Pakistani girl who was shot in the head by the Taliban for promoting education for women has been awarded the Nobel Peace Prize.

Malala Yousafzai, now 17, survived the attack and subsequently moved to Birmingham, England, where she has continued to be an outspoken proponent of peace and human rights.

Given her emphasis on the importance of education, I like this sentence from the New York Times story:

Ms. Yousafzai was at school … when the prize was announced and was taken out of her chemistry class to be informed of the award.

No previous Nobel Prize Winner was ever in high school at the time he or she received the award; Malala is the youngest recipient in Nobel history. 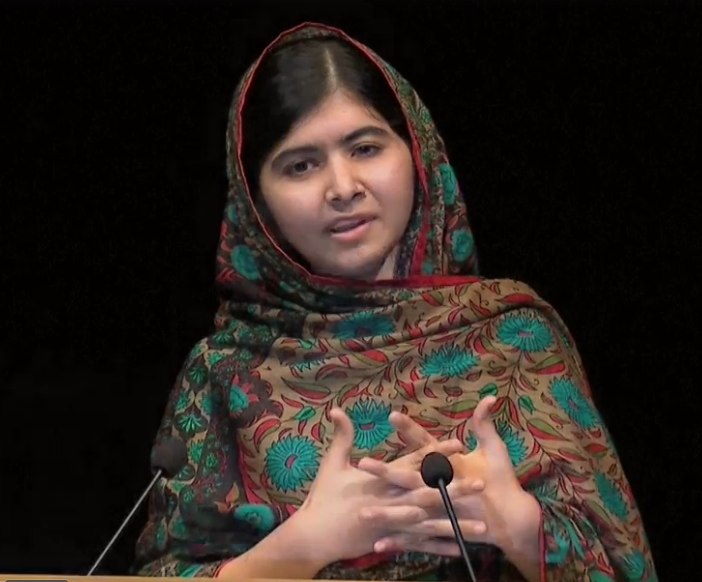 She shares this year’s honor — and the $1.1 million prize money — with Kailash Satyarthi, an Indian activist who fights child exploitation and modern slavery. Although the two are from countries that have long been at each other’s throats, with the Hindu/Muslim conflict playing the central role, the Nobel Prize Committee lauded them for what easily unites the duo:

… “their struggle against the suppression of children and young people and for the right of all children to education.”

The reaction in Malala’s former home country was mixed. There’s this:

[N]ews of the Nobel Prize on Friday inspired jubilation and well-wishers in the Swat Valley, who spilled onto the streets and distributed sweets in a traditional celebration. “We have no words to express our feelings,” said Ahmad Shah, a family friend, speaking by phone from Mingora, the main town in the region. “Her efforts have been recognized by the world with this great prize. This is a victory for the people of Swat and of Pakistan.”…

For months after the attack on Ms. Yousafzai, some residents criticized the schoolgirl, fearing publicity around her case would invite further Taliban attacks. But now, Mr. Shah said he told Mr. Yousafzai [Malala’s father] by phone, “even those who were opposing Malala are happy.”

Some residents, however, clung to the conspiracy theories that have dogged Ms. Yousafzai’s reputation in Pakistan. “Her shooting was a ready-made drama that was created by foreign powers,” said Ghulam Farooq, the editor of a small local newspaper.

The young laureate herself was unfazed, stating at a press conference today that

P.S.: This 11-minute Times documentary, The Making of Malala, is fascinating, and a little depressing at the same time. Though the girl was just 12 years old at the time, you see Malala’s father pushing her — too hard? — to become a politician, the way that other ambitious parents might try to push their kids to become tennis stars or beauty-pageant winners (a point also made by Adam B. Ellick, the maker of the film). Moreover, there’s Ellick’s assessment that

Even if the Taliban vanished tomorrow, most girls still wouldn’t be in school. Only 9 countries in the world spend less money on education than Pakistan.

Here’s hoping that Malala, and others, can change that.

October 10, 2014 The Story of the Canadian Wilderness Guide Who Experienced Anti-Christian Discrimination is a Hoax (Kind of...)
Browse Our Archives
What Are Your Thoughts?leave a comment