Todd Phelps wants to become the next mayor of Austin, Texas. Austin, if you’re unfamiliar, is known as “an island of blue in a sea of red” — it’s very liberal and thankfully so.

So you have to wonder why Phelps thinks putting prayer back in public schools will lead him to victory.

In an interview with KXAN News, he said (at the 8:22 mark below) that he wants to put “voluntary faculty-led prayer” back in school, adding that he hopes it becomes a model for the nation: 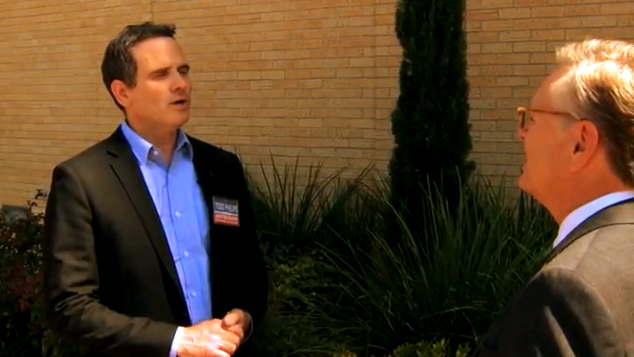 I would like to foster and support voluntary, faculty-led prayer in Austin in the mornings, and I would like it to go nationwide starting here…

He claims that the Supreme Court decision in Greece v. Galloway supports this idea. It doesn’t. When a teacher leads a prayer in the classroom, there’s major coercion going on; students are compelled to join in whether they want to or not. That’s why it’s illegal even if it’s “voluntary.”

To anyone in Austin who plans to vote for this guy, what the hell are you thinking?

October 9, 2014
Even More Church/State Violations Uncovered in Texas School District; Is Anyone There Trying to Fix the Problems?
Next Post

October 9, 2014 You Only Wish I Was Going to Hell
Browse Our Archives
What Are Your Thoughts?leave a comment