When I was teaching math — let’s say it was trigonometry — I always tried to put a question on the unit test that looked like this:

Explain to an intelligent 8-year-old why the value of sine can never be greater than 1.

In other words, could you explain what “sine” meant using basic terminology in a simple, straightforward way?* I could always tell from their responses who really understood the material and who was just regurgitating something out of a textbook.

So when a high school history teacher at Jenison High School in Michigan was discussing world religions and asked his students to “introduce Islam to 3rd graders,” I knew exactly what he meant. He wanted the students to design a pamphlet about Islam that just covered the basics. 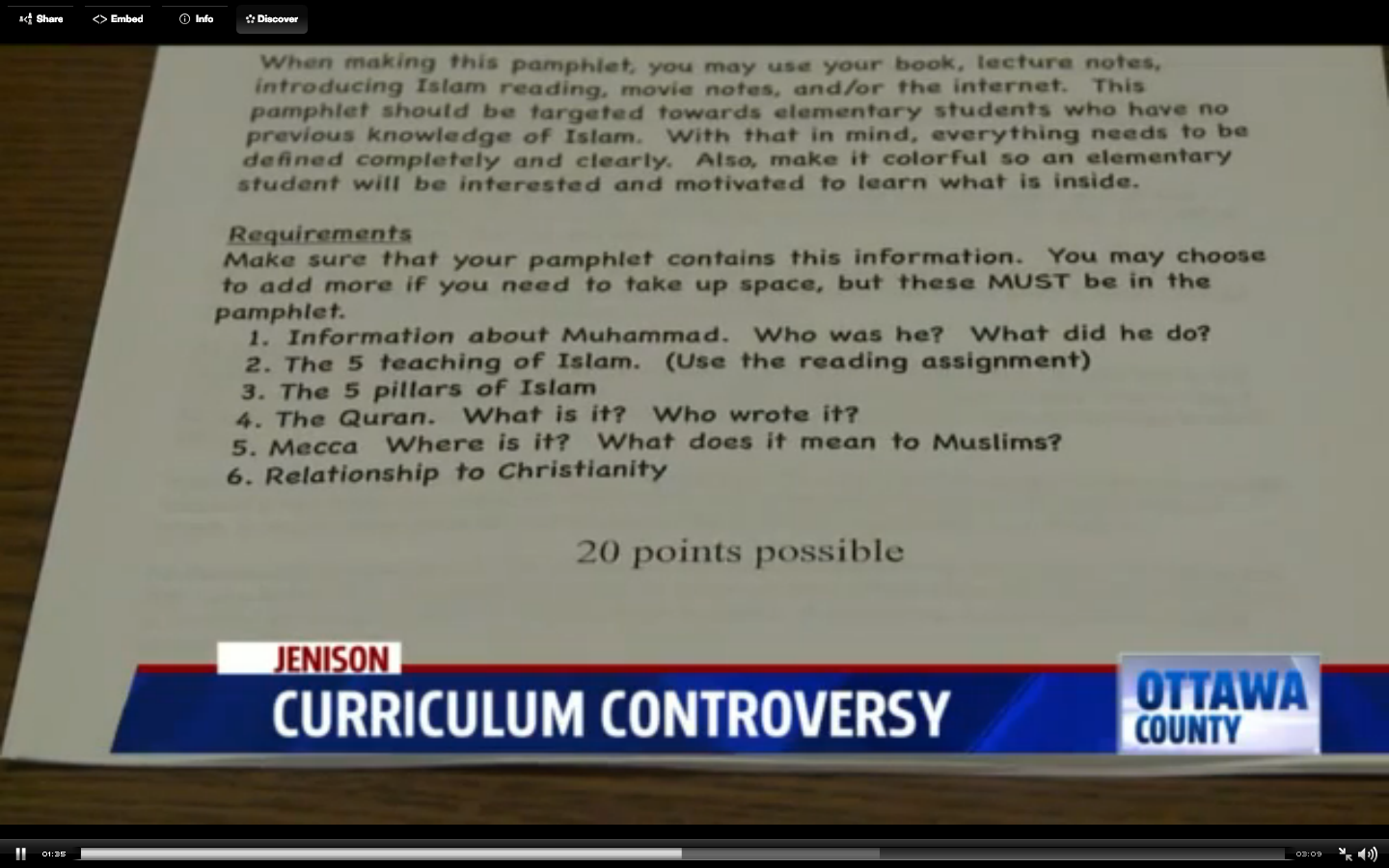 Mother Jennette Hall couldn’t figure that one out. She assumed her child was being told to preach Islam to eight-year-olds. And instead of asking the teacher to clarify the assignment, she just posted a single page of the assignment on Facebook, where gullible conservatives shared it and made it go viral.

Principal Brandon Graham said that was a complete misunderstanding of the assignment:

Graham explained that the high school students’ work would not be given to any younger students. “I have a third grade son in the district myself, and this was the farthest thing from being introduced to third graders,” said Graham.

While Hall’s original posts have been deleted (at the principal’s request), it’s clear she still doesn’t get the assignment:

This assignment upset me because they are presenting Allah as the same God of the Christians and Jews. This paper, in my opinion, is promoting Islam by describing Allahs names as ‘beautiful’. To me this is not simply factual like it should be. I have a meeting on Tuesday with the principle of Jenison High School to discuss my concerns.

A day later, Hall still hadn’t fully figured it out.

I was SHOCKED when my daughter showed me the pamphlet that she was required to make promoting Islam in a way 3rd graders could comprehend. As a mother who teaches her children that the One True Creator God is the GOD of Abraham, Isaac, and Jacob, it made me sick to my stomach to see my daughter promoting another god (Allah) as the One True Creator on a pamphlet! Islam was the ONLY religion of the 4 studied so far that was given the assignment to create a pamphlet. [Hemant says: Maybe that’s because the unit wasn’t finished yet.]

Is this World History class promoting one religion over another by requiring a pamphlet to be made only for the Islamic religion and not the others? After consulting with the ACLJ (American Center for Law and Justice) today, they informed me that if the school is promoting one religion over the other then they would be in violation of the 1st amendment. Will Jenison Public Schools consider self-correcting the issue by assigning a traditional quiz for Islam, as they did for the other religions studied, instead of a pamphlet?

Yesterday, after her meeting, Hall still hadn’t fully figured it out… but now school officials were humoring her:

In the meeting, Dr. Brandon Graham and others in attendance carefully listened to my concerns and are considering making some changes. One change discussed was adding a disclaimer on the Introducing Islam packet stating: “this is what the Islam religion believes”, and also the ‘PAMPHLET’ assignment will be discussed when they do their annual re-evaluation of assignments for next year.

Oh, to be a fly on the wall when she left the meeting and everyone else in the room laughed their asses off…

(The principal attempted some damage control on Facebook and a local news station, though it’s unclear how successful he was.)

The moral of the story: Parents who don’t understand their children’s assignments should try talking to the teachers before they make asses of themselves online.

There’s nothing wrong with teaching the major world religions. It’s important for students to have a working understanding of the beliefs that motivate billions of people worldwide. No one’s saying they have to accept any of them. Had Hall just contacted the teacher to begin with, her confusion would’ve been cleared up quickly.

October 8, 2014
Creationists May Have Given Up More Than $18,000,000 in Tax Rebates Because They Want to Discriminate in Hiring
Next Post