License? Registration? Have You Accepted Jesus as Your Personal Savior? October 6, 2014 Hemant Mehta

License? Registration? Have You Accepted Jesus as Your Personal Savior?

This past August, when Ellen Bogan was pulled over by Indiana State Trooper Brian Hamilton for supposedly passing another car illegally (which she denies), she was expecting him to ask her for her license and registration… but she wasn’t expecting questions like these: 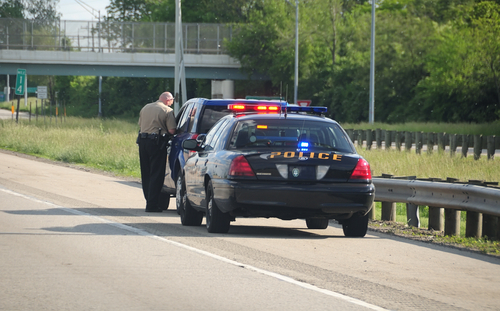 Did she have a home church?

Did she accept Jesus Christ as her savior?

“It’s completely out of line and it just — it took me back,” Bogan, 60, told The Indianapolis Star.

… [he later] handed her a church pamphlet that asks the reader “to acknowledge that she is a sinner.”

Hamilton gave her a warning ticket before asking these questions, but given the situation and the blaring sounds and flashing lights, Bogan didn’t feel that she could just drive away. I don’t blame her. Hell, if I were in her shoes, I probably would’ve just lied, said I accepted Jesus, and hoped that’s what the cop wanted to hear.

Bogan and the ACLU are now filing a lawsuit against Hamilton for overstepping his bounds:

Bogan’s complaint also claims that Hamilton asked if he could give her something and that he went to his car to retrieve a pamphlet from First Baptist Church in Cambridge City.

The pamphlet, which was included in the lawsuit, advertises a radio broadcast from “Trooper Dan Jones” called “Policing for Jesus Ministries.” It also outlines “God’s plan for salvation,” a four-point list that advises the reader to “realize you’re a sinner” and “realize the Lord Jesus Christ paid the penalty for your sins.”

“I’m not affiliated with any church. I don’t go to church,” Bogan said. “I felt compelled to say I did, just because I had a state trooper standing at the passenger-side window. It was just weird.”

Bogan spoke with the Indiana State Police and was told that Hamilton would receive “supervisory action,” but there were no more specifics which is why she’s filing the lawsuit. She’s asking for attorney’s fees and “damages after a trial by jury,” which seems rather excessive to me but that’s for a judge or jury to decide.

The Indianapolis Star asked a representative of the American Family Association of Indiana what he thought about the situation… and he gave the expected ridiculous answer:

“I have people pass out religious material all the time. Mormons come to my door all the time, and it doesn’t offend me,” [executive director Micah] Clark said. “(This case) might not be the most persuasive time to talk to someone about their faith, but I don’t think that a police officer is prohibited from doing something like that.”

Who wants to bet Clark would have a different opinion if it were a Muslim cop stopping him?

And that’s really the point here. If there’s any ambivalence about how this story should end, it’s because the cop is a Christian. If he believed anything else, this would be a no-brainer. It’d be pretty universally condemned. Preaching salvation through Christ shouldn’t be an exception to bad behavior. And, unlike what Micah Clark said, this isn’t like Mormons coming up to your door on their own. This is a government agent proselytizing to someone who neither requested it not has an escape route. It’s not like she could slam the door in his face or say she wasn’t interested.

(Image via Anne Kitzman / Shutterstock.com. Thanks to Christian Nightmares for the link)

October 6, 2014
God Healed the Hamsters... and Everyone with Diarrhea
Next Post

October 6, 2014 Is Religious Discrimination Okay if You Didn't Know You Were Doing Anything Wrong? The Supreme Court Will Soon Decide
Browse Our Archives
What Are Your Thoughts?leave a comment