Patheos blogger and Jesus follower Benjamin Corey wasn’t expecting much from the new Nicolas Cage end-times movie Left Behind. And at the Friday premiere, that’s exactly what he got, he says:

The movie was impressively horrible — infinitely worse than I had expected. As I said yesterday on That God Show, there’s some really compelling events in the pre-millennial view of eschatology, and you could make some incredibly entertaining movies about it. Unfortunately, this wasn’t one of them. Beyond being a movie with a lousy plot-line, cheesy stereotypes, and crappy special effects, the movie was simply unbiblical.

So Corey (who, full disclosure, is a good friend of mine) came up with a tongue-in-cheek list of 10 movies that are more biblical than Left Behind — including Shrek, The 40-Year-Old Virgin, Wedding Crashers, and Austin Powers. 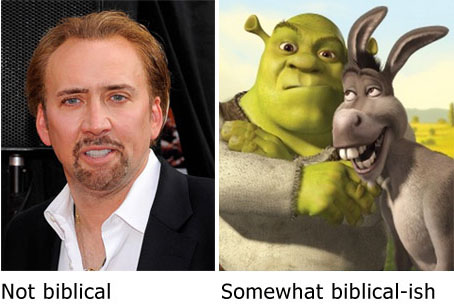 Of course, many non-believers think that every religious book, Corey’s favorite one included, is essentially this movie title.

October 5, 2014
Reza Aslan is Wrong About Islam and This is Why
Next Post