Texas State Senator Charles Perry (below) decided his swearing-in ceremony last week would be a capital opportunity to invoke Godwin’s Law in his quest to force (his) God into the public square. 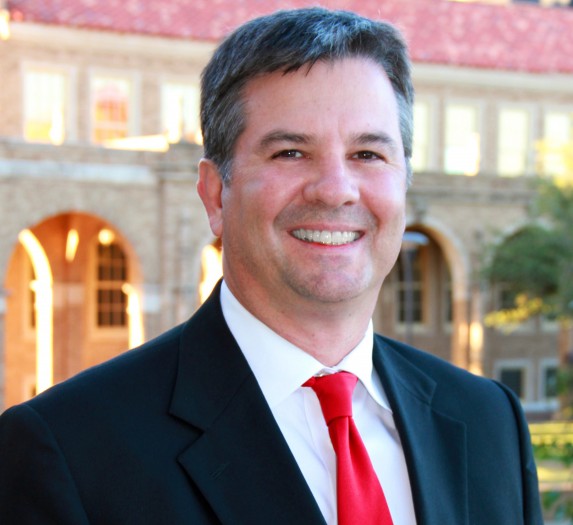 Describing his theocratic ambitions as part of a “spiritual battle for the spirit of this nation and the soul of its people,” he emphasized that abortion and same-sex marriage will be key issues.

“Roe v. Wade condemned 55 million innocent and defenseless souls that cried out for righteousness from a God who is just — we will answer for that as a nation…”

Pastor Jeff McCreight, of Rock City Church, mirrored the anti-abortion sentiment at the ceremony, invoking the Holocaust in a particularly disturbing fashion:

“The value of human life is continually being attacked by a 41-year-old Holocaust called abortion, which makes Hitler look like a humanitarian,” McCreight said.

But the pastor was joined in shockingly insensitive and downright bizarre Holocaust invocations by the senator, speaking about “laws that lead citizens away from God” as he remembered a trip to a Berlin concentration camp.

“There were 10,000 people that were paraded into a medical office under the guise of a physical. As they stood with their back against the wall, they were executed with a bullet through the throat. Before they left, 10,000 people met their fate that way,” Perry said.

“Is it not the same than when our government continues to perpetuate laws that lead citizens away from God? The only difference is that the fraud of the Germans was more immediate and whereas the fraud of today’s government will not be exposed until the final days and will have eternal-lasting effects.”

Perry might be onto something if he wasn’t wrong about pretty much everything. Like, for starters, shooting people in the throat has a pretty obvious, demonstrable negative impact. And unlike laws that allegedly “lead citizens away from God,” you don’t have to wait until a supernaturally wrought “end times” to expose the harm of killing people…

Senator Perry also complained that he was having trouble recognizing the “nation that was founded on the eternal and never-changing values of a loving God and the desire to share that.” And while that’s probably because it never existed, the senator seems to think this is a new and deeply troubling development.

But probably the most perplexing factor of this story was not the disregard for constitutional separation of church and state, not the extreme hyperbole, and not even the callous hijacking of the Holocaust for political and religious reasons. Rather, it’s this:

Perry… was elected to the state Senate in a September special election. After gaining momentum during early voting, the new state senator maintained a strong lead and avoided a runoff in the six-person race by more than 23 percentage points.

Even in Texas, it’s never reassuring to see such disregard for the Constitution, rather than being censured, warmly embraced and elected to public office…

October 5, 2014
Freedom From Atheism Foundation Trolls Atheists By Falsely Accusing Them of Trolling
Next Post