Here’s how desperate some Christians are to play victim.

There’s a new Carrie Underwood song out — which, let’s face it, you didn’t know until just now — and atheists everywhere hate it… That is, according to some conservative websites: 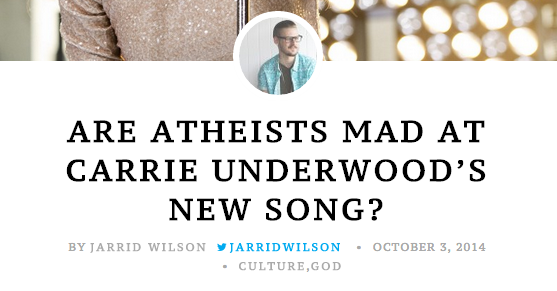 Of course, none of them actually name any atheist groups, websites, or even random individuals who have a problem with the song. Unless Underwood actually said anything disparaging about atheists in her song — which she didn’t — I don’t know why anyone would give a damn. She’s welcome to sing about her faith and the rest of us are free to ignore it.

Apparently, none of those writers noticed that atheists are pretty subdued when it comes to Christian bands, rapper LeCrae, and Gospel music in general. Unless we’re criticizing hypocrisy within the lyrics, it’s hard to imagine why atheists would freak out over Christian lyrics in songs by Christian artists.

It’s worth mentioning that the original story seems to have come from the Conservative Tribune, which is hardly a reliable website. For all we know, it’s parody. But the point is that the story is already spreading around the Internet as if it were true, because Christians love to believe they’re victims and very few of them will bother to fact-check this.

October 4, 2014
This Video Was Only Supposed to Be Seen by Those "Left Behind" After the Rapture
Next Post

October 5, 2014 Can Atheism Offer Eternal Value?
Browse Our Archives
What Are Your Thoughts?leave a comment