Is This Painting of Two Kids Praying Religious? A School District’s Lawyer Says No

This is a painting called “Faith in America” by Donald Zolan: 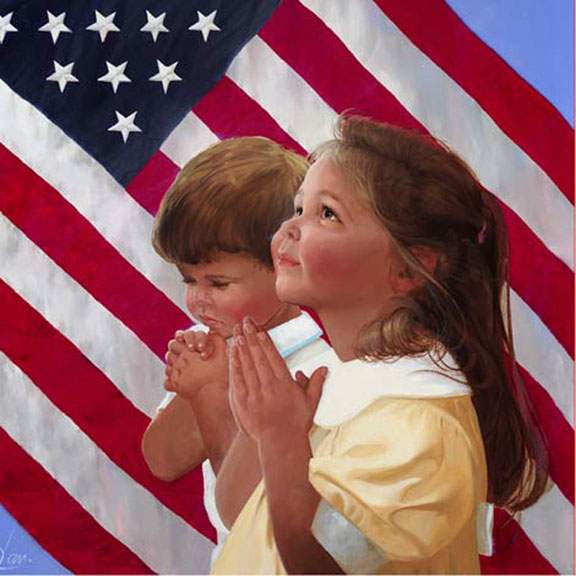 That image might have a place on a postcard or church wall, but certainly not in the main office at Kenneth Cooper Middle School in Oklahoma City… which, as you might guess, is exactly where it is. The Freedom From Religion Foundation sent a letter to the district’s superintendent urging him to take it down:

The meaning could not be more clear, real American children pray.

The district’s lawyer wrote back last week saying there was nothing wrong with the image remaining in place because:

Of course, the first point is irrelevant (being wrong for a long time doesn’t make you right), the second point makes no sense since FFRF only acts on things like this when a district parent contacts them (they protect anonymity when possible), and it absolutely sends the wrong message to students.

FFRF said all of this in a follow-up response to the district.

It all boils down to this: When you put up a painting to two kids praying in front of an American flag, the implication is clear: Prayer is good and American. What other message are students supposed to take away from the painting if not that?

Both FFRF and the parent in question (who contacted me) are trying to resolve this without any legal battle, but district officials refuse to just take down the painting and get back to educating children. It’s not a fight they ought to be waging. Just take it down, put it up in someone’s home, and move on.

October 4, 2014
Answers in Genesis Writer Defends Chemotherapy Only to Face Criticism from Faithful Followers
Next Post