Justice Scalia: The Constitution Allows the Supreme Court to “Favor Religion Over Nonreligion”

This week, during a speech at Colorado Christian University, Supreme Court Justice Antonin Scalia dismissed the entire notion of separation of church and state: 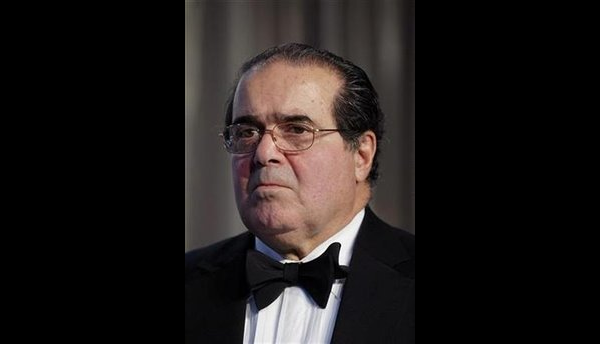 “I think the main fight is to dissuade Americans from what the secularists are trying to persuade them to be true: that the separation of church and state means that the government cannot favor religion over nonreligion,” Justice Scalia said.

“That’s a possible way to run a political system. The Europeans run it that way,” Justice Scalia said. “And if the American people want to do it, I suppose they can enact that by statute. But to say that’s what the Constitution requires is utterly absurd.”

Even if you accept Scalia’s “originalism” theory, it’s hard to believe that’s what the nation’s founders intended. They were trying to escape religious persecution; why create a country where religion could run rampant again? Separation of church and state isn’t just cornerstone of our law; it’s good policy, period.

As Kyle Mantyla of Right Wing Watch points out, Justice Ruth Bader Ginsburg has been under fire this week for her public comments about how and why the Supreme Court might take up a marriage equality case… because conservatives claim she’s “casting a vote publicly before the case is even heard.” That’s clearly not the case. But if they’re asking her to recuse herself from all future marriage equality cases because of that, then where is the outcry from the right calling for Scalia to stay out of all cases involving church/state separation?

Can any atheist really expect a fair hearing with Scalia still on the Court?

Cenk Uygur did a nice job breaking down why Scalia’s interpretation of the Constitution has no basis in reality:

October 3, 2014
A Closer Look at the Vatican Document Guiding the Synod on the Modern Family (Part 3)
Next Post