When the Secular Coalition for America decided to create election voter guides several years ago, there was some internal discussion about whether that was a good or bad idea because we didn’t want our reputation (the “atheist lobby”) to hurt candidates who supported our values. That thought was quickly laughed off, though. Like we have that sort of power!

Turns out we have that sort of power.

If you drive through central Illinois right now (near Exit 72 on I-55), there’s a billboard sponsored by the Lake County Right to Life Committee, Inc. targeting Senator Dick Durbin who just received an “A” grade from the SCA: 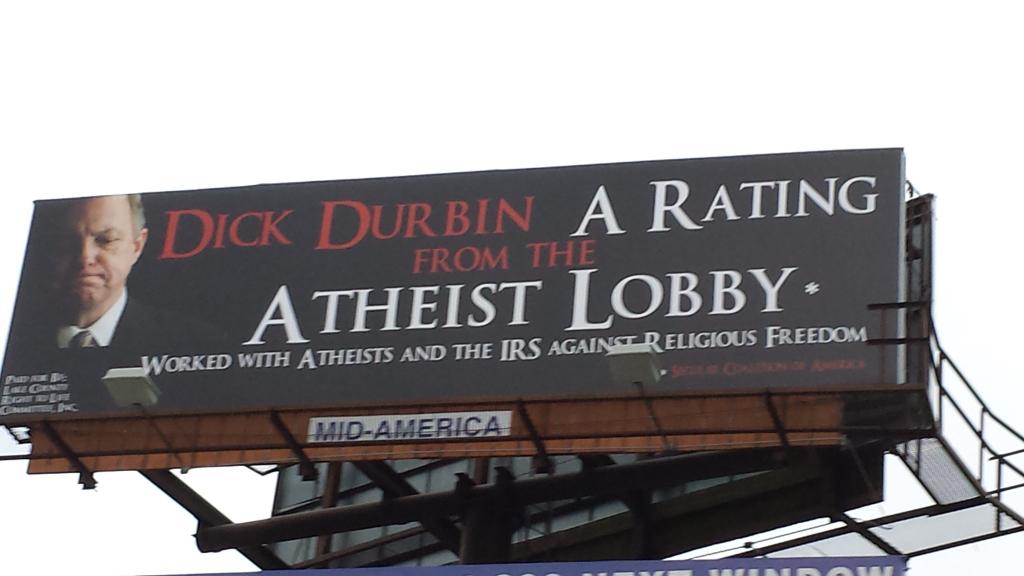 Talk about scare tactics… the group is implying that voters shouldn’t support Durbin because he “worked with atheists” against religious freedom without even specifying what he did. For what it’s worth, if Durbin worked with atheists, in any sort of meaningful way, that’s news to me. It’s more like his positions and those of the SCA were simply aligned.

On another note, can you imagine if the word “atheists” was replaced with one describing any other religious group? “Durbin worked with Jews…”? It’d be completely unacceptable.

At least Durbin is considered one of the Democrats’ safest seats in the upcoming election. The billboard won’t affect him. But it’s great to see that SCA’s voter guide is having even a negligible effect in the race. Now, if only the SCA could convince more Secular Americans to vote in their best interests, we might get somewhere…

As far as I know, this is the first time the SCA’s grades have been used in a billboard campaign like this.

I asked Lauren Anderson Youngblood, the SCA’s Director of Communications, for her reaction to the billboard and she told me this via email:

It’s unconscionable that in this day and age “atheist” is still the third rail in American politics. Our founders took great pains to ensure that the United States would be a secular democracy. Sen. Durbin has demonstrated his commitment to our nation’s traditional secular values with his support for legislation based on reason, logic and science. His “A” grade on our scorecard is something all Americans — regardless of their religious beliefs — should be proud of. It illustrates his commitment to representing all of his constituents, not just those with whom he happens to share religious views.

I also spoke with Bonnie Quirke, the President of the Right to Life Committee, and asked her why the group put up the billboard. She explained:

“We wanted people to know that Mr. Durbin got that endorsement, and some of us might feel that that’s an infringement on our religious liberty. That that’s the next step.”

Despite the wording there, she wasn’t saying the endorsement itself was an infringement, but rather that Durbin’s votes in the future would be. (I think she’s wrong, of course, but that’s a separate issue.)

She added that the billboard just went up this week and it’ll be there through next month’s elections.

(Thanks to @MichaelRuyle for the image)

October 3, 2014
This Second-Amendment Activist Is Banning Muslims From Her Shooting Range. Is She In the Right?
Next Post