Sheriff’s Office is Guided by the Five “C”s… Including Christ October 2, 2014 Hemant Mehta

***Update*** (10/6/14): The American Humanist Association’s Appignani Humanist Legal Center has sent a letter to the Sheriff’s Office, urging officials to change the symbol:

“The cross is the preeminent symbol of Christianity, and the display of it on an official, law enforcement seal sends the unequivocal message that the government is promoting religion,” said Monica Miller, an attorney with the Appignani Humanist Legal Center. “The seal also sends the message that non-Christians such as atheists and humanists are outsiders, not welcome in their own community,” she added.

The Humphreys County Sheriff’s Office in Waverly, Tennessee has an unusual logo, which it uses on both its official website and as the profile picture for the department on Facebook: 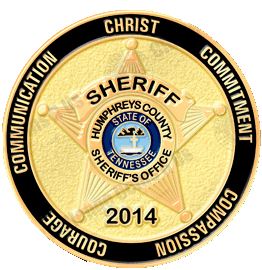 Do they only protect you if you’re a Christian? Is Jesus the Sheriff? Does Christ answer the phone if there’s an emergency? There’s just no reason to include a religious word on the official logo.

Maybe they couldn’t think of another C-word. I’ll fix that: How about Character or Competence? (Though neither word seems especially apt right now.)

I sent an email to the department asking what they plan to do. I’ll post a response once I receive it and pass this along to the Freedom From Religion Foundation if they don’t write back.

October 2, 2014
Church-Sponsored Elementary School Bible Classes May Come to a Halt if Creationism is Being Taught
Next Post