Jessa Duggar, of 19 Kids and Counting fame, recently posted a lengthy diatribe against evolutionary science and women’s reproductive care to Instagram, in which she likened abortion to the Holocaust. The post accompanies a photo from the Holocaust Museum, and it’s pretty clear out of the gate where she’s going with this. 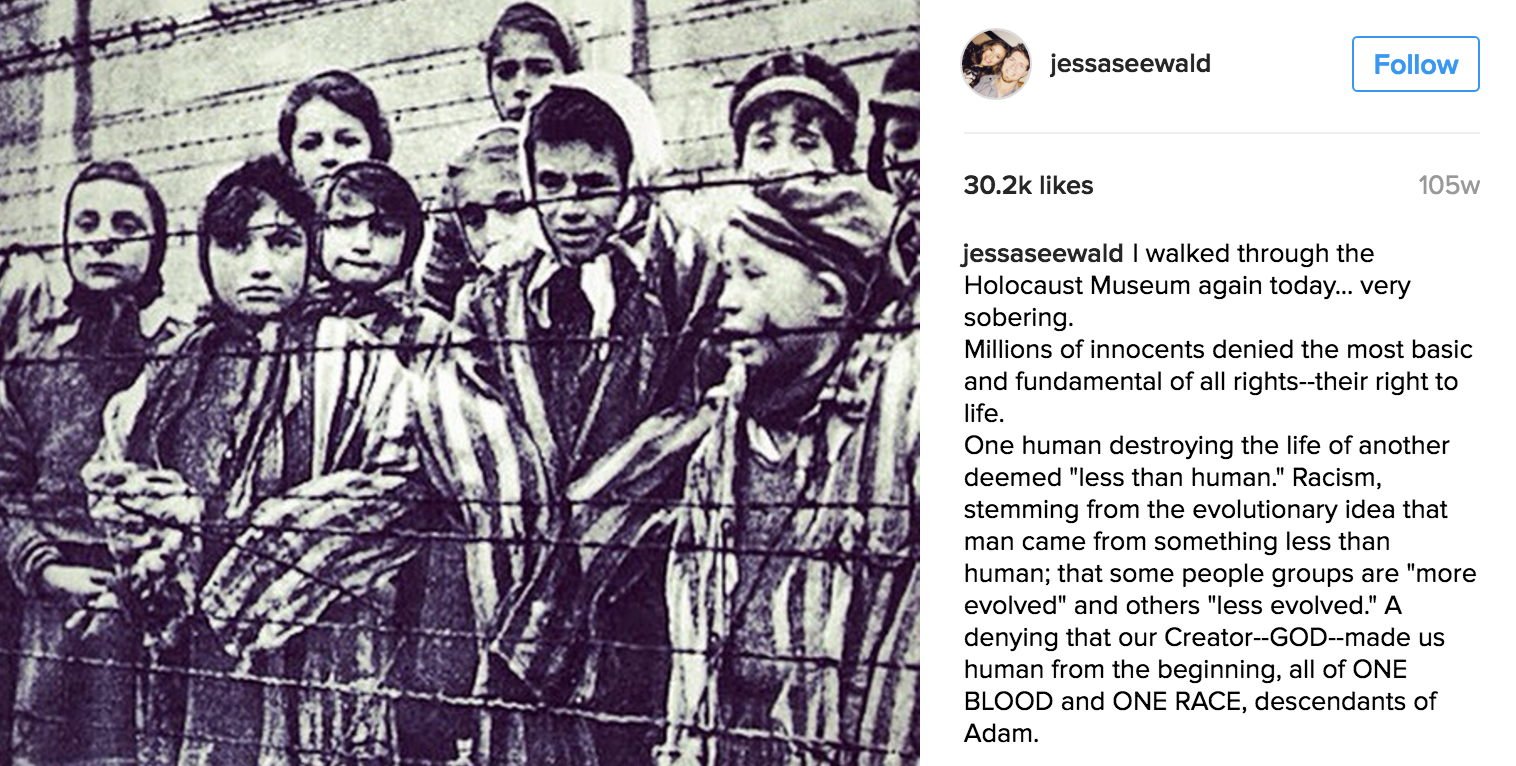 I walked through the Holocaust Museum again today… very sobering. Millions of innocents denied the most basic and fundamental of all rights — their right to life. One human destroying the life of another deemed “less than human.”

This is pretty much standard evangelical rhetoric on the subject: The Holocaust is simply another excuse to talk about abortion. Yes, it might be beyond insensitive to equate the brutal and hideous suffering of Holocaust victims with a medical procedure that overwhelmingly happens during the first trimester. Yes, it shows a marked disregard for survivors and their families. But the pro-life movement rarely makes the suffering of sentient human beings a priority over the imagined suffering of non-sentient embryos and fetuses, and Holocaust victims and their families are no exception. They are mere props in a battle of ideas. (It’s also worth noting that evangelicals believe that Holocaust victims, i.e. Jews who didn’t repent, are burning in hell right now. And deservedly so, because they “rejected Jesus.” That goes for any and every non-Christian, too. So to hear this concern — so quickly, as we shall see, passed over — for Holocaust victims rings a little hollow.)

At this point, Jessa is more or less done with discussion of the actual victims. Henceforth, any reference is merely to point at how bad science and medicine are (at least, according to her distorted version of history).

Racism, stemming from the evolutionary idea that man came from something less than human; that some people groups are “more evolved” and others “less evolved.”

Now, the comma is a bit ambiguous… but I’m taking this to mean that Jessa believes that racism stems from evolutionary thought. (The other potential meaning, that only one kind of racism — the kind that stems from evolutionary thought — is bad, is distinctly at odds with the rest of her statement, so I discount it.) Obviously, racism existed long before the theory of evolution came about, so she is flat out wrong on this one. People were using religion to promulgate racist ideas long before Charles Darwin came around. Witness the “Curse of Ham” line of thought that Christians used to justify slavery and bigotry or Martin Luther‘s rabid anti-Semitism (that found a welcome home in, of all places, Nazi Germany…).

But unlike Duggar, I’m not trying to pin the blame for Nazism on one specific idea. Evil people in general can rationalize malicious acts and twist most philosophies to their needs. That’s a given. Still, two things are absolutely undeniable (if you wish to maintain even a semblance of honesty):

Duggar either misses or is unaware of these two points.

A denying that our Creator — GOD — made us human from the beginning, all of ONE BLOOD and ONE RACE, descendants of Adam.

Duggar then sort-of-kind-of moves back to the Holocaust, switching between it and abortion rhetoric with ease.

The belief that some human beings are “not fit to live.” So they’re murdered. Slaughtered. Kids with Down syndrome or other disabilities. The sickly. The elderly. The sanctity of human life varies not in sickness or health, poverty or wealth, elderly or pre-born, little or lots of melanin [making you darker or lighter skinned], or any other factor. “If thou faint in the day of adversity, thy strength is small. If thou forbear to deliver them that are drawn unto death, and those that are ready to be slain; If thou sayest, Behold, we knew it not; doth not He that pondereth the heart consider it? and He that keepeth thy soul, doth not He know it? and shall not He render to every man according to his works?” (Proverbs 24:10-12) May we never sit idly by and allow such an atrocity to happen again. Not this generation. We must be a voice for those who cannot speak up for themselves. Because EVERY LIFE IS PRECIOUS. #ProLife

Again, the actual victims of the Holocaust are mere pawns in a game of anti-abortion one-upsmanship. Their suffering, their stories, are barely worth mentioning, except to get back to a political point: science is bad. Not believing in (my!) God is bad. Reproductive freedom is bad. Because, you know, Holocaust. It’s Pro-life Godwin’s Law in action. And it’s dishonest, and ultimately disrespectful to the people who suffered and died during the Holocaust.

While, in fairness, Duggar is not unique in doing this, she is the latest in a long and sordid history of evangelicals wildly misrepresenting science, and exploiting Holocaust victims as a mere lead-in line or two in the abortion debate.

October 2, 2014
A Closer Look at the Vatican Document Guiding the Synod on the Modern Family (Part 2)
Next Post