A City-Sponsored Hydraulic Cross May Soon Be Used to Promote Abortion, Gay Marriage, and Atheism

Last month, I posted about a giant hydraulic cross that goes up several times a year atop Dewey Hill in Grand Haven, Michigan:

The cross came into being in the early 1960s as a gift to the city (and it quickly became the centerpiece for a giant nativity scene). The city pays for the cross’ upkeep now by quietly adding its maintenance costs to the contracts of any group that rents nearby Waterfront Stadium, even though the groups wouldn’t know it. (***Edit***: I’ve been told by Mitch Kahle that there’s no evidence of the Stadium costs going to maintain the hydraulic cross.)

In other words, if you want to rent the public facility, you’re paying for the preservation of a Christian cross.

City officials maintain that it’s not just a Christian symbol. For example, during the annual Coast Guard Festival, they “dress up” the cross like an anchor. 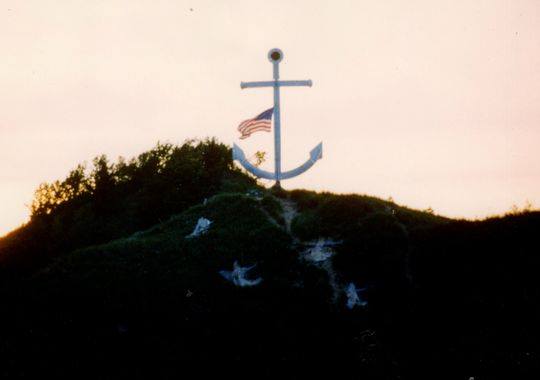 That would be fine if it was an anchor year-round… but the costume is temporary. And the Mayor seems to think this is all perfectly legal:

“It does not cost the taxpayers of the city anything,” said [Grand Haven Mayor Geri McCaleb].

“Usually it is people from out of the community [who complain about the cross], and they are offended and so they bring it up,” she said. “We look at our policies and make sure that we are abiding by court decisions and that we are not being illegal in any way.”

The taxpayers aren’t directly paying for it, but anyone who wants access to the stadium, a city-owned facility, is. There’s really no difference. Even if a church paid all the maintenance costs, it’s still a promotion of Christianity by the city, no matter how they want to dress it up. It’s not like city officials would allow a hydraulic Star of David or statue of Baphomet, right?

Well, now they’re going to have to use the equipment that’s reserved to erect the cross to promote traditionally anti-Christian ideas.

Readers of this site may remember Mitch Kahle and Holly Huber, who used to live in Hawaii and were church/state separation watchdogs there, too. They created a Facebook page last month to challenge the Hydraulic Cross. Now, the two of them, along with local residents Brian and Kathy Plescher and attorneys from Americans United for Separation of Church and State, are making an ingenious request: They want the hydraulic system to be used to promote their views (which also means the cross must come down at those times):

At this time, our clients will provide their own displays. Specifically, they would like to attach the following displays — consisting of banners, flags, or symbols — to the hydraulic lift, and have the lift be placed in the raised position, during the following dates and times:

Additional displays and dates may be requested. At least one of our clients will be in Grand Haven throughout the time each display is up.

Our clients further request that, before each of their displays is attached to the hydraulic lift, the City remove the cross that is currently attached to the lift, so that our clients’ messages are not conflated with or distorted by the preeminent symbol of Christianity.

The local newspaper, as you might imagine, is all over this: 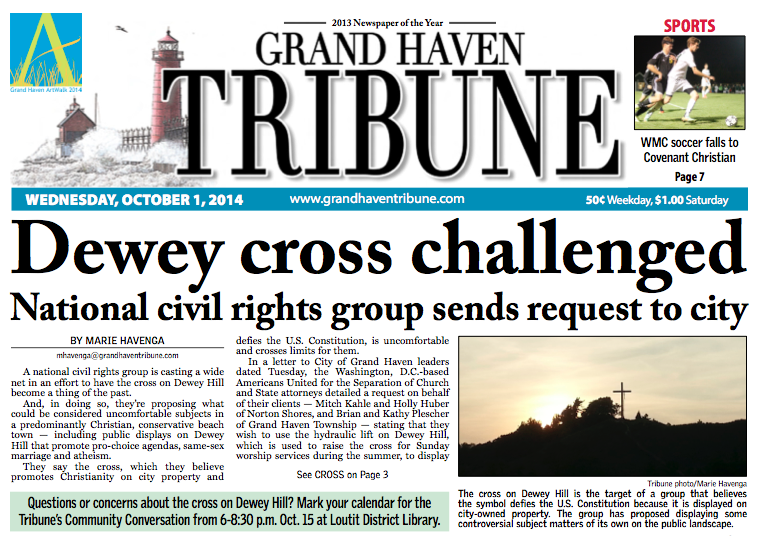 On Tuesday afternoon, McGinnis and McCaleb both said they had not received any such letter from Americans United for the Separation of Church and State, and would not comment on correspondence they had not seen.

Luchenitser said he also sent the correspondence via regular mail, which should arrive at City Hall in a day or two.

There should be a lot of excitement in Grand Haven over the next few weeks.