A couple of weeks ago, I posted about some questionable statements Neil deGrasse Tyson makes in his presentations.

One of them in particular invoked something President George W. Bush supposedly said after 9/11 (beginning at 1:35): 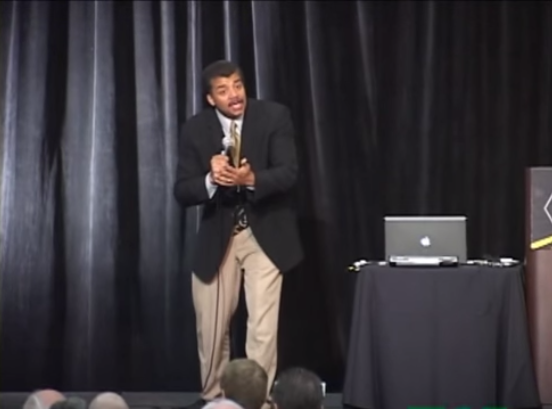 … He says, “Our God” — of course, it’s actually the same God, but that’s a detail. Let’s hold that minor fact aside for the moment. Allah of the Muslims is the same God as the God of the Old Testament. So, but let’s hold that aside. He says, “Our God is the God” — he’s loosely quoting Genesis, biblical Genesis — “Our God is the God who named the stars.”

To be clear, according to Tyson, a week after 9/11, Bush said “Our God is the God who named the stars” in order to distinguish us (the good guys) from the fundamentalist Muslims (the bad guys).

He followed that up with a line about how two-thirds of the stars actually have Arabic names (cue audience laughter). Not only are we united in that way, we owe a great debt to Arabic scientists of the past.

The problem was: There’s no evidence Bush actually said that right after 9/11. They only time he says anything close to it is from 2003, after the explosion of the Space Shuttle Columbia, as a phrase intended to unite us all. Watch the 2:45 mark:

The same Creator who names the stars also knows the names of the seven souls we mourn today. The crew of the shuttle Columbia did not return safely to Earth; yet we can pray that all are safely home.

Far from dividing us, Bush actually used the words to bring us together.

A few days ago, Tyson responded to accusations that he was taking Bush out of context — which he was — by saying he really did remember Bush saying that, or something like it, right after 9/11:

I have explicit memory of those words being spoken by the President. I reacted on the spot, making note for possible later reference in my public discourse. Odd that nobody seems to be able to find the quote anywhere — surely every word publicly uttered by a President gets logged.

FYI: There are two kinds of failures of memory. One is remembering that which has never happened and the other is forgetting that which did. In my case, from life experience, I’m vastly more likely to forget an incident than to remember an incident that never happened. So I assure you, the quote is there somewhere. When you find it, tell me. Then I can offer it to others who have taken as much time as you to explore these things.

One of our mantras in science is that the absence of evidence is not the same as evidence of absence.

My concern wasn’t that he was making a political point against Bush (which some of his critics suggested), but that he was saying something untrue and continued to repeat it in his speeches. If he wanted to use that anecdote, why not at least double check that it’s true?

Last night, Tyson posted some thoughts on Facebook about his public talks. Most of it is random yet entertaining, but wedged in there is an explanation about the Bush quotation:

… I was wrong about when he said it. It appears in his speech after the Columbia Shuttle disaster, eighteen months after September 11th 2001. My bad. And I here publicly apologize to the President for casting his quote in the context of contrasting religions rather than as a poetic reference to the lost souls of Columbia. I have no excuse for this, other than both events — so close to one another — upset me greatly. In retrospect, I’m surprised I remembered any details from either of them.

Of course, very little changes in that particular talk. I will still mention Islamic Extremists flying planes into buildings in the 21st century. I will still contrast it with the Golden Age of Islam a millennium earlier. And I will still mention the President’s quote. But instead, I will be the one contrasting what actually happened in the world with what the Bible says: The Arabs named the stars, not Yahweh.

That’s great. That’s all we wanted. This wasn’t an attempt to bring Tyson down — at least not by me; I remain a huge fan — but a request for his stories to be corrected when the evidence shows they’re not true. I know there are people who seem to have it out for the guy no matter what he does. I’m not one of them. I want him to continue being a strong voice for science education and space exploration. But he shouldn’t have to resort to the playbook of many pastors to do that. The Grammar Nazi part of me still wishes he’d remove the quotation marks around lines that were never actually uttered… but this is a huge step in the right direction.

Once again, I have to give a huge hat tip to Sean Davis of The Federalist for raising these concerns in the first place. They were fair points to bring up and I hope he’s satisfied with this response.

(Thanks to Liz for the link. Portions of this article were posted earlier)

September 30, 2014 Pickens County Board of Trustees (SC) Will Allow Invocations, but Only Religious Groups Will Be Invited to Give Them
Browse Our Archives
What Are Your Thoughts?leave a comment