Retired wrestler and musician Michael “Purely Sexy” Hayes recently released a song called “Why Can’t the Children Pray in School“… which is strange, since the chorus doesn’t include the lines, “They can!” or “You’ve got to be shitting me.”

Here’s the actual album art for the song, proving that he means business: 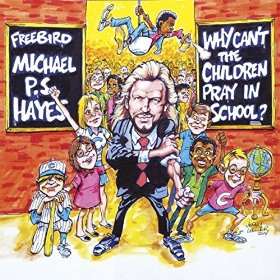 He promoted the single with this tweet a few days ago…

I went ahead and bought the song — the things I do for you people! — and it’s exactly as bad as you think it is.

Here’s a brief sample of the lyrics:

You know, at school, there’s a lot of right and wrong.
What could it hurt to read the 23rd Psalm?
With all the troubles ahead, let’s give ’em some relief.
In “One Nation Under God” is what we believe.

Now imagine that with a weird country twang, throw in some children singing “Jesus Loves Me” for no good reason, do that for five minutes, have a fade out at the end, and there you have it.

(Thanks to Brian for the link. I think.)

September 30, 2014
Pickens County Board of Trustees (SC) Will Allow Invocations, but Only Religious Groups Will Be Invited to Give Them
Next Post

September 30, 2014 Ohio Elementary School Distributed Yearbooks with a Christian Cross on Them
Browse Our Archives
What Are Your Thoughts?leave a comment