This is a guest post written by Stuart Grief. For over 20 years, Stuart has worked with CEOs and senior leaders both as a consultant and c-suite executive. 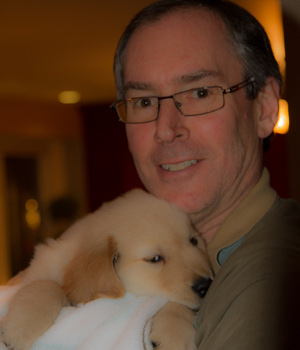 About seven weeks ago, I was diagnosed with stage IV lung cancer, a rare occurrence for a non-smoker and otherwise healthy person in his early 50s. Although I hope it is not the case, I can imagine some religious people wondering whether I was afflicted due to my disbelief in God. If that’s true, it’s hard to imagine a more petty and vengeful all-powerful God.

What I’ve been exploring for the past few weeks are my feelings related to my illness. Although they have run the gamut of emotions, one I’ve not felt is anger. I can imagine that if I did believe in an omniscient, omnipotent, omnipresent God, I would have some questions for Him. The absence of a God belief has allowed me to accept the randomness of this occurrence as I would a lightning strike or a piano falling out a window. I’ve spent no time wondering or lamenting “Why me?” and have focused instead on my treatment and what I can do to enjoy whatever time the latest in medical science can provide me.

I’ve been fortunate to receive encouraging messages from many friends and family members and cannot imagine dealing with this illness alone. I have noted that many — if not most — of the messages include some form of, “Our thoughts and prayers are with you.” For some I suspect it’s simply a turn of phrase. Others have described more explicit prayer activities in church or synagogue. I’ve not felt offended in the least by these expressions, recognizing that they are an attempt by those who care to do something — anything — to help, and for that I am grateful.

However, these mostly well-educated well-wishers have me wondering what they think about their prayers, and how they resolve the dissonance I quickly ran into as I thought about it. If God is willing to answer their prayers, why has He chosen to afflict me in the first place? If He has a reason or plan for my affliction, why would their prayers change His plans? Is He surprised in his omniscience that so many people care for me? Will He realize that He made a mistake? And how is it that my mortal sin of disbelief can be overcome by their fervent prayers?

Since the misfortune of my diagnosis, there have been a number of positive developments. Scans showed that the cancer was not visibly present in my brain, bones, or organs. It was “contained” to my lungs and lymphatic system. I was found to have one of only a few genotypes of lung cancer that have been identified, and there are oral therapies that target these mutations with very few side effects. I’m feeling dramatically better after only five weeks on this therapy. And I’m fortunate to live in Boston, only minutes from the Dana-Farber Cancer Institute where I’m being treated (and where some of the research related to my therapy was done and continues). As my wife diligently communicates my changing situation to our friends and family, a number commented that they “knew God would hear their prayers.” Again, I wonder how they avoid the dissonance I would experience over such beliefs.

I haven’t yet had the opportunity to discuss this with some of my believing friends and family. Under normal circumstances I might avoid such discussions, but perhaps, feeling empowered by my illness, I might just ask them some of the questions I posed above.

I often hear that religion provides people with comfort in times of distress in their lives, making me wonder whether my beliefs might change in a similar way. I can unequivocally state that my beliefs have not changed despite my current situation. I find it much more comforting to know that my illness is the result of the randomness inherent in any complex system and to place my hopes in the incredibly skilled scientists and physicians battling this disease, rather than the capricious whims of a dictatorial deity. Belief in a supernatural agent as the cause of, and presumably rationale for, my illness would only add stress and anxiety to an already difficult situation.

September 29, 2014
Scenes from the Protest on Behalf of the Teenager Who "Violated" a Statue of Jesus
Next Post

September 29, 2014 Becoming an Atheist Has Health Benefits
"Didn't Eric also suggests that people should be vaccinated before they are allowed to vote? ..."
guerillasurgeon This Heavy Metal Remix of Televangelists ..."
"Or steak on a stick (channeling RenFest). Or even steak sans stick. Just steak, basically."
Maltnothops Woman Injured After Falling 20 Ft. ..."
"Because they know that isn't so. Like so many other right-wing Christian organizations, they are ..."
thatotherjean Christian Hate Group Loses Appeal Challenging ..."
"Be sure to get him the Blue Raspberry flavor with the "Bling Bling" on the ..."
Alvin "Creepy" Karpis This Heavy Metal Remix of Televangelists ..."
Browse Our Archives
What Are Your Thoughts?leave a comment