At the Values Voter Summit yesterday, Liberty Institute President Kelly Shackelford explained how Christians were under attack in American… and offered three examples.

All three, as you might expect, have been thoroughly debunked. 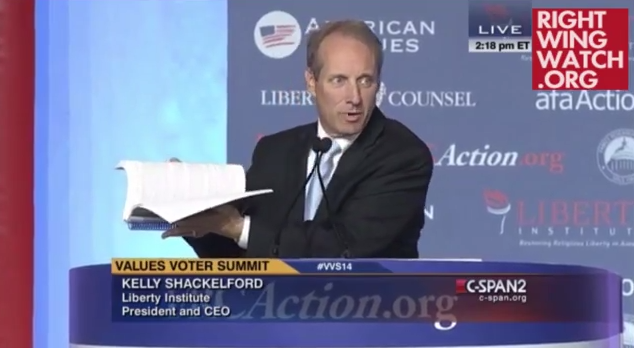 The first claim about the young girl who was supposedly told she was not allowed to pray before eating her lunch turned out to be totally false, as it was a story that was completely ginned up by Liberty Institute, Todd Starnes, and the man in charge of marketing Starnes’ latest book about ant-Christian persecution.

The second incident Shackelford cited is a myth that has been floating around Religious Right circles for nearly twenty years and was debunked nearly as long ago when school officials explained that the student in question was disciplined for fighting in the lunch room, not for praying.

The final claim about Sgt. Phillip Monk is something that Shackelford has been promoting for several years now, mainly by fundamentally misrepresenting what actually took place.

If there were actual examples of Christians being persecuted, the groups he believes are “attacking” him would be among the first to defend their rights. But those examples are just nowhere to be found. Even if they found one or two, there’s certainly no evidence of any widespread persecution.

September 27, 2014
Pagan, Making the Most of His Opportunity, Delivers a Very Memorable Invocation in Escambia County, FL
Next Post

September 27, 2014 Generous Atheists Are About to Make a Major Donation to a Single Incredible Charity
Browse Our Archives
What Are Your Thoughts?leave a comment