Neil deGrasse Tyson Explains the Questionable Quotations in His Presentations

About a week ago, I posted about some questionable statements Neil deGrasse Tyson makes in his presentations. Having seen him in person, I felt he led the audience to believe they were direct quotations… even though there was no evidence of those exact statements ever being made. 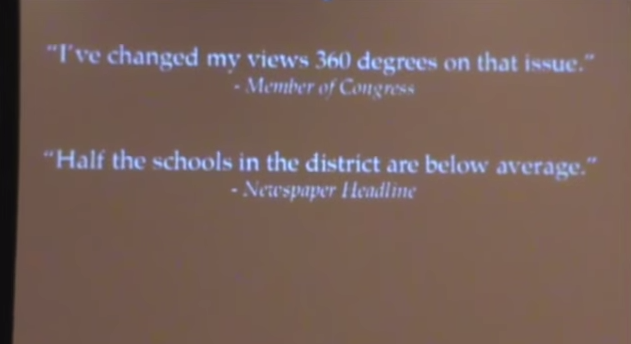 Those two above are perfect examples. There are no citations, but the lines that are supposed to be indicative of our nation’s innumeracy are in quotation marks, and the way he brings them up (near the 1:38 mark below) makes you think they were actually said.

Keep in mind he often makes similar presentations, so this was hardly an isolated incident.

Last night, on Facebook, Tyson responded to Sean Davis of the Federalist — the guy who initially raised the suspicions. He explained that the quotations were not actual quotations, but that he also never intended for them to be seen in that way:

The [below average] quote was drawn long ago from my memory of a news story that appeared in the New York Post in the early-to-mid-1990s. It was a second-tier headline. The point of my commentary was not to indict a particular publication or journalist but to make a broader statement about STEM illiteracy in America, and how that can adversely affect our future economic stability as a Nation. The exact reference is long lost.

I’ve actually heard this [360 degrees] quote several times in my life, but only once (in person) with a member of Congress. Again, as with the NYPost, names don’t matter here. My point is not to indict an individual but to cite a broader issue that affects all of American society. A point clear and present to all those who attend my talks and who glean the context in which this information is presented.

I would disagree that the paraphrasing was “clear and present” to everyone in attendance. I was there for the video above. I heard it. I’ve seen subsequent videos in which he does the same thing. We all were supposed to think someone actually said or wrote those words.

What about the line George W. Bush supposed said after 9/11 about how “Our God is the God who named the stars”? Tyson claimed Bush said that in order to distinguish us (the good guys) from the fundamentalist Muslims (the bad guys). He went on to make the humorous point that two-thirds of the stars that have names have Arabic names. The problem with that story is that there is no evidence we can find that Bush ever said that after 9/11. (He did, however, say it in a different context nearly a decade later.)

Tyson responded to that, too:

I have explicit memory of those words being spoken by the President. I reacted on the spot, making note for possible later reference in my public discourse. Odd that nobody seems to be able to find the quote anywhere — surely every word publicly uttered by a President gets logged.

FYI: There are two kinds of failures of memory. One is remembering that which has never happened and the other is forgetting that which did. In my case, from life experience, I’m vastly more likely to forget an incident than to remember an incident that never happened. So I assure you, the quote is there somewhere. When you find it, tell me. Then I can offer it to others who have taken as much time as you to explore these things.

One of our mantras in science is that the absence of evidence is not the same as evidence of absence.

Well, Sean Davis looked. I looked, too. So far, we haven’t found it. But it’s not our job to find the phantom quotation. If Tyson is using it to illustrate a point, it’s his responsibility to make sure it’s accurate.

As I wrote before, none of this makes me think Tyson is intentionally lying to his audiences or that his science writing is anything but solid. There’s certainly a difference between what he puts in print and what he says in a casual presentation.

But I don’t think it’s too much to ask for Tyson to either: 1) find citations for these statements (or others) before using them in a presentation, 2) explain that he’s just paraphrasing something he thinks was said, 3) search for new examples of powerful people making mathematical errors or Bush saying something ignorant (it won’t be hard), or 4) drop those lines from his talks altogether in the future.

There’s not a single apology in the entire message from Tyson, because he’s defending his statements and misquotes against someone he seems to think is out to get him. But I thought Davis had good points before, and I’m still not convinced Tyson believes there’s a problem. That’s unfortunate.

Just admit you either misremembered or made up a Bush quote @neiltyson. This denial flys in face of scientific method http://t.co/3vxwXv44rN

We’re supposed to be the people who always have citations for our claims. Let’s leave the false-anecdote-telling to pastors and conservatives.

You can read The Federalist’s take on Tyson’s response here.