When a Child Dies, Is it Right for His Public School to Invoke Religion? September 26, 2014 Hemant Mehta

When a Child Dies, Is it Right for His Public School to Invoke Religion?

Earlier this week, a football player at Gladewater High School in Texas was in a horrible car accident and lost his life. (His brother, the driver, was hospitalized but later released.) It’s just a devastating loss for that school and the boys’ family, as you might imagine. 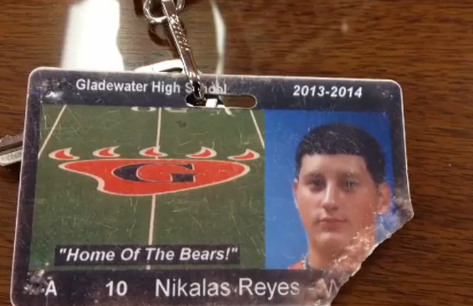 I’ve been at a school when a student dies. It’s awful getting that phone call from an administrator. No teacher wants to think about lesson plans and no student can concentrate in class. At our school, counselors and social workers were made available to any students and faculty members who needed them, and we held a moment of silence over the intercom out of respect to the student and those who were close to her.

At Gladewater, the principal and football coach gathered the students together in the gym to announce the loss…

[superintendent J.P.] Richardson said high school students and staff members were called about 9 a.m. into the school auditorium, where head football Coach John Berry emotionally announced his player’s death. The news drew a gasp from the audience of nearly 600, who “had no idea what they were doing in the auditorium,” the superintendent said.

That’s… not how I would’ve announced such horrible news, but okay, not my decision to make.

The bigger issue is how school officials offered to help grieving students:

Grief counselors and youth ministers were at the school Wednesday, and “we’ve slowed things down today,” but “we still need to stay in routine,” Richardson said. “We feel that’s important.”

“I thought it was best that they all heard it at once,” Richardson said, although it is a “big blow when you hear something of that nature at one time.” The students were told to be thinking about the Wisinger family, and a student-led prayer was said before the assembly dismissed, said Richardson.

Counselors from all the school district’s campuses, youth ministers and youth pastors were waiting for the students, who were told to take their time and remain in the auditorium if they needed to, the superintendent said. As the pupils exited, there were two tables where they could write notes to the Wisinger family, he added.

So this raises an important issue: There’s no doubt the school crossed the line by allowing a prayer at a mandatory assembly (the “student-led” part is irrelevant because of that) and bringing in Christian pastors. And while Christian students may want to speak to those pastors, it’s not the school’s job to provide religious counseling.

If this happened when the loss of a student wasn’t central to the matter, it would be a no-brainer. But should the reason for this assembly negate the problems with it and temper our response?

An attorney from the Freedom From Religion Foundation sent a letter to the superintendent today explaining the issue while doing his best to respect the grief everyone must be feeling:

We write to ask that while the District continues to help students and faculty cope with this terrible event it ensure that this tragedy is not used to promote religion to students.

More important than the legal arguments against organizing prayer at school assemblies, the District’s promotion of prayer marginalizes any teachers and students who are non-Christian or nonreligious. Nonreligious students dealing with the tragedy of a classmate’s death do not need their grief compounded by being reminded that they are not part of the religious majority in their community. A moment of silence would have set an appropriate ton and served the same purpose as a prayer without cheapening the participation of nearly one-in-three Americans under the age of 30.

We trust that Gladewater High School and the District will take the appropriate steps to ensure that no District representative is promoting [religion] within the school system. Thank you for your time and attention to this matter.

I’m sure FFRF’s critics will jump on the notion that they’re making this “all about them” instead of about the student, or that this is a harmless injustice and they should just let it go. But a tragedy shouldn’t be an excuse for ignoring the Constitution. No one’s threatening a lawsuit or anything; FFRF is just asking the superintendent to be mindful of the law in the future.

This is a letter to the one person who can easily, quickly, and quietly make appropriate changes if this were to ever happen again — and I genuinely hope it doesn’t — but I wouldn’t be surprised if right wing groups (or even other atheists) use this as an opportunity to complain about how we should be silent about First Amendment issues in times of crisis.

September 26, 2014
Here's Video of the Atheist Invocation in Huntsville, Alabama
Next Post

September 26, 2014 A Look Inside Focus on the Family's New Guide for Oblivious Christian Parents Teaching Their Kids About Homosexuality
Browse Our Archives
What Are Your Thoughts?leave a comment