A Look Inside Focus on the Family’s New Guide for Oblivious Christian Parents Teaching Their Kids About Homosexuality September 26, 2014 Camille Beredjick

Focus on the Family has released a mind-boggling “resource” that you simply cannot overlook.

“How to Talk To Your Children About Homosexuality,” a gem of a packet by Jeff Johnston, is split into sections for preschoolers, elementary schoolers, and kids 12 and over. 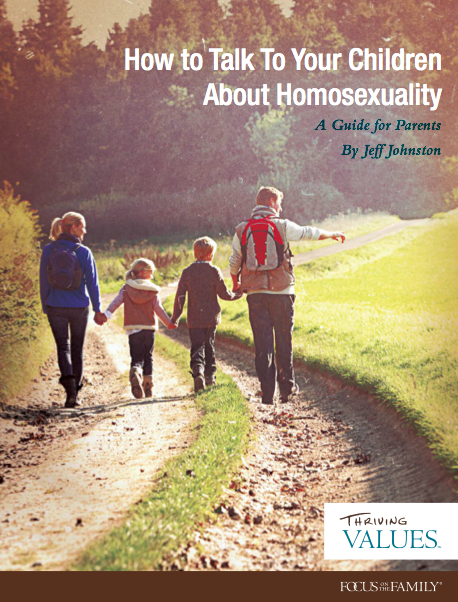 A quick caveat: Focus on the Family wants you to know that this is NOT for parents who actually have (*gasp*) LGBT children. Should you find yourself in that situation, there’s a hotline you can call for urgent assistance. I wish I were kidding, but this is literally printed on the first page:

This resource does not provide information or advice about helping children or teens who have “come out” and identify as gay or bisexual, assisting those who are struggling with gender confusion, or counseling those who were sexually abused and may be questioning their sexual identity. Instead, this guide is for parents addressing their children about homosexuality when it is encountered in the culture.

[Making a mental note to call this number next time I need advice on asking a girl out.]

The basic instructions provided in the book are not particularly groundbreaking for the right-wing world. 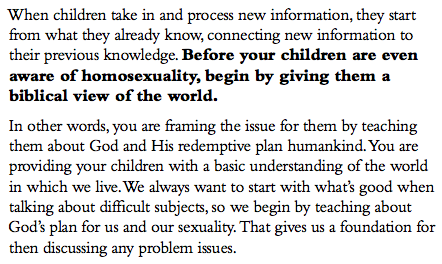 Before your children are even aware of homosexuality, begin by giving them a biblical view of the world.

In other words, you are framing the issue for them by teaching them about God and His redemptive plan humankind. You are providing your children with a basic understanding of the world in which we live. We always want to start with what’s good when talking about difficult subjects, so we begin by teaching about God’s plan for us and our sexuality.

So instill feelings of supremacy, prejudice, and moral superiority in your kids before they’re old enough to read. The Bible can help with this, apparently.

Borrowing on C.S. Lewis’ ideas from The Four Loves, this would be a good age to explain to your children that there are different types of love… Marital love has purposes and characteristics that are distinct from other loves. And the more important or higher a gift is, the greater impact it has when it is corrupted.

Explain that, as part of humanity’s disobedience, love can be disordered, out of bounds or inappropriate. Homosexuality is one distortion of God’s design for human love. Two men in a marriage relationship are missing something — the femininity of a woman. And two women who live as if they were married and raise a child together are depriving that child of the masculinity of a father in their home. Two moms can’t be a dad.

That’s right: As soon as possibly, teach your little girl that the greatest thing she could ever be is a man’s wife. And, more importantly, that her womanly womanness is what will make her attractive to men. While you’re at it, teach your little boy that masculinity is all that really matters, so it’s probably time to swap that teddy bear for a G.I. Joe or something.

Finally, when your kids get to junior high:

As part of setting the framework for talking about homosexuality, it would be helpful to talk to your children about competing worldviews that attempt to define who we are, why we are here and where we derive our answers to those questions.

There are those who believe and teach that there is no God, and “the only real meaning I have in life is what I choose. I don’t have a purpose or ultimate end; I can be whatever I want.” We define ourselves and give our lives meaning.

In this view, everything is up for grabs — the self, sexuality, marriage, family and children. So marriage can be redefined to be something that it’s never been before — two men or two women. Sexual relationships only have the meaning that I choose to give them. Culture or the individual gives parameters for sexual relationships, with the current ethos being, “I can do whatever I want, as long as no one gets hurt.”

In this non-biblical, human-centered view, sexual activity has been separated from marriage and procreation, and even from being a male-female union. It becomes more about seeking pleasure or self-fulfillment.

Wait. You mean to tell me sex is FUN?

Even male and female can become whatever I choose, or I may choose to identify as and express myself as neither, both or something completely different. If gender is a social or personal construct, then I can be whatever I choose. That’s one reason why groups push for the abolition of “male and female” and “mother and father” from documents and language. Or online groups may offer custom genders when people sign on.

Watch out, Facebook… Focus on the Family knows what you’re up to, and they’re after you next.

A summary up to this point: Attractiveness to the opposite sex is your entire purpose in life. You have no say in who you are or who you will become. There are other belief systems out there, but don’t pay attention to them. Got it? Good.

My favorite part of this literary masterpiece has to be the “real-life scenarios” peppered throughout. For example:

Your family is traveling and visits a new city. It’s June, right when school lets out for summer vacation. As you enjoy the sights, you begin to notice rainbow flags, t-shirts and displays, and your family starts to see same-sex couples holding hands. You’ve stumbled into a gay pride celebration, complete with parade and festivities. Your young son or daughter asks: “Why are those two men holding hands? Why are those two women kissing? What do all those rainbow flags mean?”

My answer: Park the car, go get an ice cream and join the fun.

Their answer (keep in mind, this is in the preschool section):

“Because of God’s word, the Bible, we believe God made men and women, and He planned marriage to be between a husband and wife. But sin came into the world and causes all of us to do wrong things. One wrong thing some grownups do is try to change God’s plan for marriage so that two men or two women can marry.” [Stupid grownups!]

“Not everyone believes and follows God’s plan for marriage, so sometimes two women will act like they are married. But they can’t really be a husband and wife, because they are both women. Sin has confused them, and they need God’s help to follow Him.”

Your teenage daughter has a good friend, “Bradley,” who has just confided in her that he thinks he’s gay. She’s come to you with questions and is looking for advice and support.

“Sweetie, we’re so glad Bradley felt safe to talk to you about these important issues. That’s a heavy burden for him to carry. We are praying for God to move in Bradley’s life so he will know God’s love and follow Jesus. If he wants it, there is good Christian counseling that can help him understand his attractions and respond to them in a biblical way. Can we pray together for Bradley?”

Focus on the Family had a lot to say about Bradley, including (thankfully) not outing him to his family, but also encouraging him to spend more time with men (seriously) and “not identifying as gay too soon.”

Nowhere does it say “Bradley is fine just the way he is.” But why would it?

And, finally, there’s the “Uncle Mike” scenario, which caused me physical pain to read:

“Uncle Mike” has come out to the family as gay and is bringing his same-sex spouse to the upcoming family get-together.

“You know God made us male and female in His image, and the Bible explains that God gave us marriage between man and a woman as a good gift. Well, not everyone follows God’s plan. Uncle Mike just told us he identifies as gay, and he wants to follow those feelings in his life. He is now married to a man and will be bringing his partner to the next family get together. We love Uncle Mike and pray he’ll return to following God’s design for marriage and sexuality.”

“We don’t believe that Uncle Mike was born gay or that God made him homosexual. And we don’t know all the factors that have influenced him in that direction. We are going to love him and his partner, and we’ll pray for them. We disagree with his decisions, but that doesn’t mean we love him any less. It’s hard when someone you care about moves in a direction that is contrary to God’s plan.”

Hmmm. So Uncle Mike is gay. But we’re not allowed to be gay, going back to the pride parade example:

We suggest not saying something like, “Those men are gay. Gay is when two guys like each other.” That’s confusing to boys, who at this age are developing a stronger internal sense of masculinity — primarily through distancing themselves from girls and identifying with and relating to other boys and men.

Ta-da! Children whose parents abide by this guide will learn literally nothing. It’s a grab-bag of mixed messages, hate speech, and general inanity that teaches kids to hate before they know what hate means.

But it’s not like anyone was expecting better from Focus on the Family.

September 26, 2014
When a Child Dies, Is it Right for His Public School to Invoke Religion?
Next Post