Blake Griffin grew up in Oklahoma so it’s hardly surprising that the NBA star and dunker-extraordinaire is religious. But in a new GQ interview, the Clippers star spoke (I use that word loosely) at length about why he’s a Creationist… even though he “believe[s] in science”: 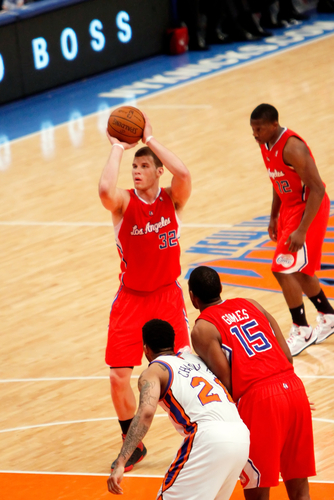 Were you surprised at the reaction when you said recently that you believed in creationism?

Yeah, I was a little bit — just because, like, if you said you believe in evolution, I’m not gonna be like, “You fucking idiot!” [laughs] You know what I mean? I’m just gonna kind of be like, “That’s whatever.”

Do you believe in science?

I believe in science. I believe in all of that. I just… Honestly, when I’m at the beach and I’m looking at the ocean, I’m looking at the mountains and the sun is setting, I’m seeing people running up and down, laughing, having fun, I’m like, “This had to be created. This is created.” And that’s my personal thing.

So it’s not an elaborate theory about, “Okay, man and dinosaurs were both here at the same time on this particular date….”

I might not have put thought into it, honestly. [laughs] I just kind of like, oh, yeah, creationism, that sounds good! But I guess I never really put so much thought into it, because I never thought that people would be pissed or really make me think twice about it. If you ask like 90 percent of the people in Oklahoma, they’d agree. And then when you get to coasts, it’s very, very different. And a lot of people are very closed-minded when it comes to things like that, and don’t — I don’t want to say closed-minded, but it’s their way or the highway. And it’s unfortunate that people on both sides are very closed-minded about it. Because there are religious people who are very closed-minded to a lot of things that aren’t necessarily right, in my opinion. So it’s on both sides.

I’d be a lot more frustrated if he were a politician or teacher, but it’s hard to be mad at a basketball player for not knowing much about science, especially when he freely admits he’s “never really put so much thought into it.”

Now, if only Ken Ham would admit the same thing…