As we noted on this blog a couple of years ago, Pastor Heath Mooneyham, of Missouri’s Ignite Church, is a little preoccupied with sex and masculinity. How preoccupied, I had no idea until I read this profile of Mooneyham over at Vocativ. To say that the man revels in frat-boy humor would be an insult to frat boys. Good-ole-boy humor is more like it, maybe — the foul-mouthed, sexist kind that is pumped up on testosterone, and whose purveyors regard every male who doesn’t join them in their crude observations as a neutered milquetoast. 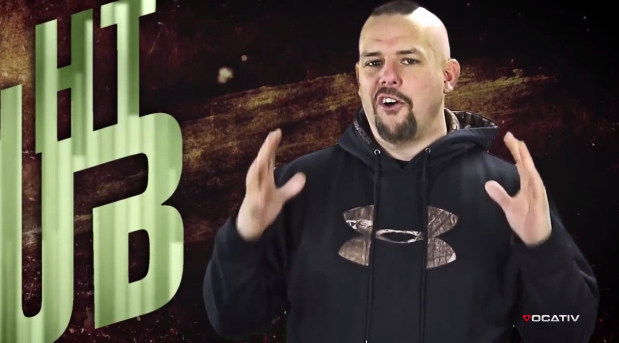 Since we last shone a light on him, Mooneyham’s church has grown by leaps and bounds (he recently raffled off a pair of assault rifles to boost church attendance, and says it was a great success). The decor of Mooneyham’s church (one of 300 in Joplin, population 50,000) might have something to do with that.

[T]here are no prissy pastels, flowers or potpourri. The color scheme is a mix of black, gray and what church leaders call “zombie green,” and there’s a vintage Atari arcade game in the men’s bathroom. It feels more like a Jet Ski dealership than a house of worship, with its core values depicted in images of grenades [and] mustaches.

As the Ignite Church’s popularity has grown, so have the lifestyle accouterments that you might not expect to find in a house of God.

Built atop a hill on 2,000 acres, the compound has its own barbecue trailer for giant cookouts and a floor-to-ceiling television for watching football. The kitchen stove ducts have custom vents traced from .50-caliber Browning machine gun cartridges, and there’s a mounted buck’s head in his office. [Mooneyham is] halfway through building his own bar on the first floor.

He takes me down to a secret room on the lower level and flips a switch to reveal an arsenal of assault rifles, shotguns and ammunition. His most cherished weapon is a .50 BMG sniper’s rifle, which can tear through a target more than a mile away. Church members chipped in $3,800 to buy it for him in celebration of Ignite’s fifth anniversary last year.

“You pull that trigger and it makes your pecker hard,” he says.

Elsewhere in the piece, Mooneyham (who is married, by the way) and his buddies drink beer and harass two waitresses at a restaurant, the evening before another one of his macho Sunday sermons.

“What the hell is this supposed to be?” Mooneyham asks the young woman, pretending to be puzzled by the [cheese fries] now in front of him. “This is potatoes with alien sperm“…

After a few more pints, the pastor starts in on a second female bartender. “Are you coming?” he asks, taking a long pause to let the sexual innuendo set in. “I mean tomorrow. To church.” The men all laugh. The uncomfortable employee sizes up the hulking man in front of her with the mohawk and tattoos in a football jersey and says no, she doesn’t plan on going to church.

“What’s the matter? Do you have freakin’ daddy issues?” he persists.

Mooneyham is unapologetic about it all.

“I think this world needs a lot more masculinity in it,” [he] recently told a room of Ignite members. “I think it’s really passive and feminine and sissy, and I’m sorry if that offends you, but it’s just the truth.”

During another recent church get-together, he laid into women, reminding them that to be good Christian spouses, they must submit to their husbands:

“Your husband is not your puppet to where you use sex to manipulate him to get what you want,” he told his church this summer. “A lot of you women do that. And it’s deadly wrong.”

Applause and hoots bursted from the audience when Mooneyham asked: “What do we have around here for the ladies? Hopefully a good godly man with a pair between his legs to take care of you one of these days.”

When he’s not busy badgering women, Mooneyham sums up his approach to religion thusly:

Thanks to Vocativ, we also learn that he’s got a criminal past, with multiple arrests and at least one conviction — for being the driver in a robbery. I guess among his followers, that just boosts his street cred — small-time gangster saved by the Almighty whose word he now preaches.

Too bad he can’t seem to keep out of trouble with the law: Just last week, he was arrested for driving under the influence and announced without a trace of his usual swagger that he would relinquish “direct leadership” of the church for a while while he undergoes “counseling.”

September 24, 2014
Memphis News Station Thinks Atheists Gathering at Nearby Hotel on Easter Weekend is a "Raging" Controversy
Next Post