“Clergy on Patrol” Program Must Be Stopped, Says Humanist Group

The idea behind ‘Clergy on Patrol’ is simple, Rochester Press Officer Jessica Alaimo told The Huffington Post. The program will pair up clergy members and police officers for foot patrols with the hope of improving relations between law enforcement and the local community, which have taken a hit in recent months.

“The goal is to mend the mistrust certain neighborhoods have in the police by using the trust they have in the clergy as a bridge,” Alaimo said. “While we’ve been building this program for some time, the recent riots in Ferguson and the shooting we had here highlighted the need for it.”

Such an overt partnership between the government and religion — having clergy serve as a sort of beat partner for City police officers, with all the actual and apparent authority that derives therefrom — violates the Establishment Clause of the First Amendment in an elementary sense. Whatever good intentions may be behind this joint enterprise between religious clergy and law enforcement, the violation of the separation of church and state is clear.

… It is self-evident that placing clergy in a role of official partnership with police, walking the streets with them and otherwise serving as official conduits to the community, has the effect of giving them status, thereby providing an endorsement of them and advancing their religious missions.

Need more proof of proselytizing inevitably making its way into the program? Here’s a still taken from the city’s website: 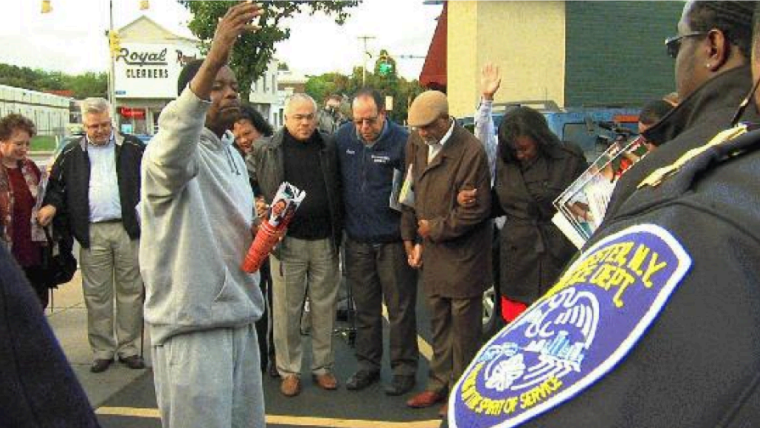 I’m gonna go out on a limb here and say the police shouldn’t be involved in whatever the hell that person’s doing.

“Police can have relationships with community leaders, but having ministers of the Gospel as official beat partners is way out of bounds… This program practically deputizes religious clergy.”

This is one of those instances where the AHA is right on principle but may have a hard sell convincing anyone it’s a bad idea. If clergy members can help bridge the gaps between community members and law enforcement, great! They can definitely play a vital role in improving those relationships. But they can’t do so in an official capacity that promotes Christianity as much as anything else.

The city needs to end the program and find another way to enlist the help of religious leaders.

(Thanks to Devi for the link. Original image via Shutterstock)

September 24, 2014
In the Least Surprising News You'll Hear Today, Stephen Hawking is an Atheist
Next Post