Last week, we learned that Republican State Senator John Thrasher (below) was one of the finalists to become Florida State University’s next president: 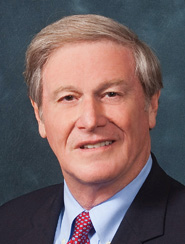 The research-focused school held forums for the final four candidates and Thrasher couldn’t even answer simple questions about evolution and climate change:

The next person to pose a question, law professor Mark Seidenfeld, asked Thrasher if he believed in evolution.

“I have a great faith in my life that has guided me in my life in a lot of things I believe in,” Thrasher said.

College of Communication professor Andy Opel pressed Thrasher on climate change, asking him if believed it is real. “Do you accept the science behind it,” Opel said.

Like Gov. Rick Scott, whose reelection campaign Thrasher co-chairs, Thrasher declined to give a specific response. At that point, two students in the front row appeared to Thrasher to be laughing at his answer.

He threatened to leave, saying he “would not be heckled.”

Those answers alone should have doomed his candidacy (not to mention the fact that he had no experience in academia). Instead, last night, the Board of Trustees voted 11-2 to install him as the school’s next president:

The appointment is subject to approval by the Florida Board of Governors.

“I am honored to have been selected by the Board of Trustees to serve as Florida State University’s next president,” Thrasher said. “I look forward to leading the university to even higher levels of excellence. My goal is to advance the faculty and the research, service and teaching mission of this university. I want Florida State to be the best place for students to receive an education, so they can realize their dreams.”

It’s up for debate how much he’ll be able to advance research when he can’t even admit to accepting what scientists overwhelmingly agree upon.

Just read through his candidate feedback page (now deleted from FSU’s website) and check out the detailed explanations by students and faculty members for why he shouldn’t be hired. When you consider all their concerns, it’s absurd that the Trustees would give him the keys to the school.

Florida just lived up to its stereotype.

(Thanks to Tiara for the link)

September 24, 2014 Memphis News Station Thinks Atheists Gathering at Nearby Hotel on Easter Weekend is a "Raging" Controversy
Browse Our Archives
What Are Your Thoughts?leave a comment