***Update***: After this piece appeared, Veronica Abbass contacted me to provide the official explanation for why the video piece featured only Ontarians who have fought to get prayer out of public meetings. No Ontario-centric conspiracy theories or even budget constraints here — it’s simply that Ontario is the only Canadian province in which the appeals court has ruled on the subject of public prayer during municipal council meetings, clearing the way for the challenges presented in the video. You can learn more about the relevant case law here.

The Canadian Secular Alliance is getting ready to exercise its intervenor status in the Saguenay prayer case, in which Quebec Humanist Alain Simoneau is trying to have prayer and religious imagery in public meetings declared a violation of non-Christians’ rights to freedom of conscience.

At this juncture, the organization has decided to revisit the past experiences of three Canadian secularists who also sought to keep municipal politics inclusive by booting prayer out of public meetings.

They interviewed Veronica Abbass, Peter Ferguson, and the late Dagmar Gontard-Zelinkova, as well as Secular Ontario president Sheila Ayala, and pulled the interviews together to form this mini-documentary (followed by full-length raw-footage videos for context). 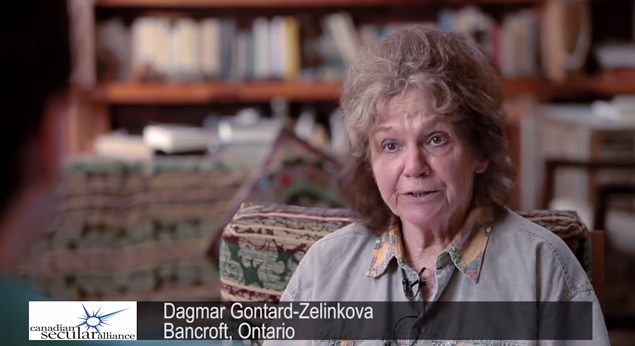 While it would have been nice if the filmmakers had chosen to interview anybody from outside of Ontario, a province that gets a fair amount of criticism for being so darn Ontario-centric, I can understand the choice of interview subjects. The video weaves together the separate legal fights in various parts of the province through Ayala’s Secular Ontario, then relates them to the Saguenay case. It probably doesn’t hurt that Canada is very big, the organization’s home base is in Toronto, and the video likely had to be made on a shoestring budget if it was going to function as a fundraising aid rather than eat up the already-available funds.

Canadians have a reputation for being polite and accepting, and for our federal policy of multiculturalism, so it’s a bit of a shock to see such a widespread failure to recognize why public Christian prayer at municipal meetings is really not a very Canadian way to conduct our local governance. The lack of inclusion impacts people of diverse non-Christian faiths as well as the whole range of non-believers, particularly in districts where the Lord’s Prayer is still used automatically and without much thought.

The Canadian Secular Alliance hopes that the video will raise awareness about the upcoming Supreme Court case and encourage people to contribute donations to help defray their associated costs. Those interested in donating can do so at the organization’s website.

September 23, 2014
The Black Mass in Oklahoma Featured 42 Attendees and *Hundreds* of Catholic Protesters
Next Post

September 23, 2014 Pharrell Williams: "It’s So Incredibly Arrogant and Pompous" Not to Believe in a Higher Power
Browse Our Archives
What Are Your Thoughts?leave a comment