An Atheist Will Deliver the Invocation in Huntsville, Alabama (!) Later This Week September 23, 2014 Hemant Mehta

An Atheist Will Deliver the Invocation in Huntsville, Alabama (!) Later This Week

Back in June, we learned that the City Council in Huntsville, Alabama had invited Blake Kirk to deliver an upcoming invocation, only to rescind that offer after learning that he was a Wiccan. They cited “community fears” as the reason for his rejection. 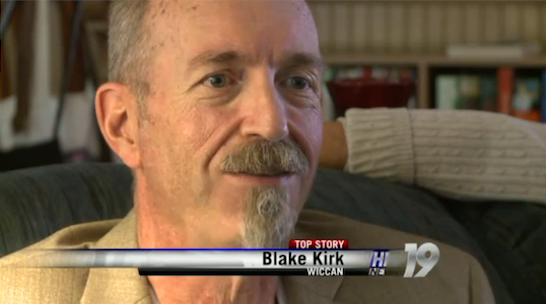 Some readers wrote emails to council members in response, and the general consensus among those members was that they had no idea why this happened. The selection of invocation speakers, they said, was done by Rev. Frank Broyles, a local interfaith leader who coordinated the invocation calendar.

Well, after that brouhaha, the council was determined to make sure future invocations would reflect the “diversity of beliefs of Huntsville citizens.”

It would be much easier to either have a moment of silence — which is what the City Council will continue to do from time to time and also if a minister has to cancel at the last minute — or to have nothing, Broyles said. But the struggle to acknowledge and honor the diversity of paths in the community that give citizens meaning is worth engaging.

So a couple of weeks later, what did they do to showcase that diversity?

They invited a Methodist:

Debbie Esslinger, an active lay member of Trinity United Methodist Church and volunteer leader with Interfaith Mission Service, urged the mostly full council chambers to “reach across our differences and beyond our comfort zones to discover the common threads in all of us.”

Only in Huntsville is a Methodist someone far from the mainstream…

City Attorney Peter Joffrion said that Kirk would be invited back soon, adding, “We decided to pull back, to do some education maybe, and to introduce him more gently at another time.”

“More gently.” As if Kirk was anything but gentle or the Christian critics are going to magically settle down after a couple of weeks.

Well, maybe Broyles has finally come to his senses. Kirk hasn’t been invited back, but to my surprise, an atheist will give the invocation later this week. (Did I mention this is in Alabama?!)

“This is a small step in the right direction to bring Huntsville’s ceremonial practices in line with recent court decisions and make Huntsville’s claim of being an ‘Inclusive Community’ a reality,” said Miller.

[Miller added:] “This was never about having an atheist give an invocation; it is about following the law and treating everyone as equals.”

A press release issued by Miller pointed out that the Huntsville City Council has twice rejected atheist inclusion at meetings:

The inclusion of an atheist among those offering the invocations did not come without demands being made by three national organizations that promote the separation of religion and government. In 2012, Huntsville resident Shannon Kish tried to contact the City Commission about the issue but they were unresponsive. Ms. Kish took her concern to the Freedom from Religion Foundation and they wrote the City alerting them that their practices were not in compliance with the law then in effect. In the spring of 2013 Mr. Miller requested a meeting with the City to discuss the issue, pointing out that a number of religious groups and the non-religious were still not represented among those offering the invocations, offering to provide names of leaders willing to serve in that capacity. “The City did not follow up”, according to Mr. Miller. “I knew that the method the City was using to select those offering the invocations and had told them so. Apparently they could not accept constructive alternatives that would include the non-religious and I knew that sooner or later they would misstep”. Earlier this year the City cancelled the invocation to be offered by Blake Kirk, a Wiccan, substituting a “moment of silence” for that session and later returning to the practice of offering an invocation. Americans United for the Separation of Church and State wrote a letter on Mr. Kirk’s behalf.

I’ll post the video of McCauley’s invocation as soon as I have it.

(Large parts of this article were posted earlier.)

September 23, 2014
After Atheist's (Second) Impassioned Plea Against "In God We Trust" Signs, Ballwin Officials Reject Them in 6-2 Vote
Next Post

September 23, 2014 Why the "Atheist Positivity Challenge" is Wildly Misguided
Browse Our Archives
What Are Your Thoughts?leave a comment