Ex-Gay Evangelical Suggests We Treat Our Gay Friends Like They Have Cancer September 22, 2014 Camille Beredjick

(Translation: “How to Justify Your Hatred of Gay People.”)

In the video, ERLC’s Lindsay Swartz interviews Rosaria Butterfield, who is famous for all the wrong reasons. Butterfield is the self-described “unlikely convert” who has written widely about her conversion from a feminist lesbian English professor to an evangelical pastor’s wife. Back in February, students at Wheaton College demonstrated at her presentation about “religious and sexual conversion,” arguing that Butterfield’s narrative is “not the only story” when it comes to being LGBT and Christian.

And now, because she’s been around that block, Butterfield (on the right, below) is apparently the right-wing authority on talking to and about LGBT people. 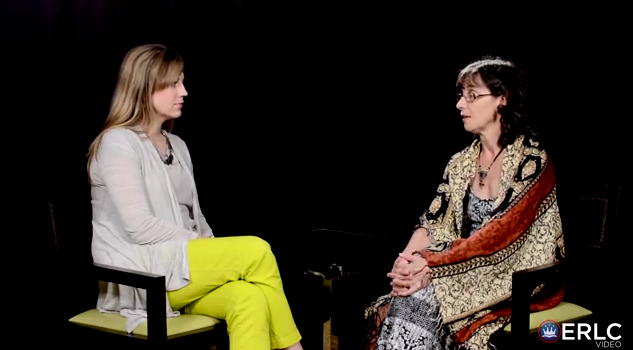 Swartz introduces the video as a conversation about “how to minister to those struggling with same-sex attraction,” but with a special emphasis on what language to use:

I oftentimes get intimidated when I’m trying to use terminology, or figuring out how to minister to those struggling with same-sex attraction, or, you know, do I say homosexuality? Homosexual? Gay? What’s going to offend?… What are the most important ways and the wisest ways that people in the church, and us as women, can be ministering to the people we know who are struggling with this?

Butterfield’s response is not promising:

The Christian church will have to work very hard to love our gay and lesbian neighbors… and that includes our sons and our daughters. One of my takeaways from having been in the community for a decade is those folks are good listeners and Christians need to be more reciprocal in their listening.

So I would say the first thing to do is if a friend shares either an identification as gay or lesbian, or a struggle with same-sex attraction, to ask that person what the parameters are now for how we talk about this. You would do that for a friend who had cancer. You would want to know if it’s okay to talk about publicly or privately. You would not presume, because you hadn’t experienced it, how you should frame it.

This could have been good advice if she hadn’t a) compared being gay to having cancer and b) said everything else I’m about to mention. Yes, it is extremely important to respect people’s privacy, keep secrets to yourself, refrain from making assumptions, and ask what words are okay to use. The problem is when you begin the conversation already believing that being gay is a problem.

Regarding terminology, she adds:

For the most part, the term “homosexual” is not a term that people in the LGBT community warm up to, it tends to be more of a clinical term.

Yes, that’s true! Very good! This is the only time you might suspect that Butterfield used to be “one of them.” Very few right-wingers will ever use the term “LGBT,” instead referring to us as “homosexuals” or using other outdated language. (Those slightly more savvy will say “gay and lesbian,” but it’s rare for the B or the T to ever get a shout-out.) It’s even more of a shame, then, that she follows that up with this statement:

Never mind that “gay” and “lesbian” often are the preferred terms for people who identify that way; according to this advice, Christians should push to find a “neutral” way to talk with someone about their identity. And by “neutral,” I mean intelligible to common Christians, deliberately non-affirming, and disregarding the wishes and feelings of the LGBT person in question.

Here’s how this happens in my head:

Well-meaning Christian relative: So, what words should I use to talk about your… you know… affliction?

Well-meaning Christian relative: Homosexual? Is that okay? Does that represent you?

Taking Butterfield’s guidance to heart, Swartz brings up her own personal experience of not knowing how to tell a loved one she’s disgusted by their existence:

… I have a family member that struggles with this but is openly living in that type of lifestyle and claims to be a believer as well.… When you’re trying to build a relationship with somebody, where would you start?

Well, certainly, friendship evangelism is an ideal place to start. And really, let’s not even use the term “friendship evangelism,” just going back to the command to be good neighbors. What’s challenging is that we have for so long pummeled a false gospel that we have many people who believe they are Christians who ought not. And that can be a very hard conversation to have.

Can we all take a moment to cringe in unison at the phrase “friendship evangelism”? Butterfield wants us to appreciate that she’s against proselytizing at strangers, but suggesting that friendship is an acceptable avenue to degradation is not any better. More importantly, though, she wants us to know that there is a dangerous population at large: LGBT people who say they’re Christian but can’t possibly be. (Hello, Matthew Vines.)

There is an exclusive claim that Christ has on our hearts, and on our allegiances, and on the scripture. And so to claim that the Holy Spirit is calling and leading you to live in a way that the Bible condemns is the deceptiveness of sin. And it’s a grievous thing, really. It’s a grievous thing that we have people who genuinely believe that they are Christians because they believe in Jesus. Because even the demons believe in Jesus.

You read that right, kids. Even the demons believe in Jesus. And you don’t want to be thought of as a homosexual demon, do you?

In her next lengthy point, Butterfield denounces the “ex-gay” mentality that so many of her Christian colleagues support, whether in the form of supposed conversion therapy or the mentality that you can just try really hard to be straight. This is especially weird coming from a woman who literally claims to have converted from homosexuality to heterosexuality.

… I think for a long time, people who struggle with same-sex attraction have felt that the church is denying the facts of their feelings and using scripture to bulldoze that, but that’s not — if that’s what we’re doing, that’s a sin. What God has called us to do is use the true scripture to interpret the facts of our lived experience; it doesn’t make the facts go away.

I think we need to stop acting as though the solution to homosexuality is heterosexuality. [See what I mean?!] That is not a scriptural idea. And I think that we go there because we are squeamish and because we don’t like the idea that some people suffer more than others. We really don’t. We find it painful to think that our friends in the church who struggle with same-sex attraction might just have a bigger cross to bear than everybody else. And I think it would be a much greater kindness to remember that God gives one person one cross and another ten crosses, but the Lord promises that he will actually bear up the heavier part of that cross.

There’s no “solution” to homosexuality, then. (We knew that, but many conservatives don’t.) Instead, Butterfield wants us to accept that LGBT people might have it a little harder, and she thinks we should rest easy knowing they’ll get a little extra help from the Man Upstairs to deal with it.

Finally, proving that she knows some pop culture references and can make her point in a catchy soundbite (she’s not like a regular Christian; she’s a cool Christian):

I don’t know what to do around the word “sin.” You know, sin is a beautiful word because we’re all in it together. Guess what, we were all born that way, whatever “that way” means, every single one of us. Nobody’s exempt. In some ways, that’s the equal playing field.

This conversation amounts to little more than two closed-minded people patting each other on the back for their homophobia. Unfortunately for them, there is no linguistic loophole or scriptural excuse that justifies bigotry — and it’s especially disappointing when someone who used to know better argues the opposite.

September 22, 2014
The Ocala (FL) Police Department is Less Effective Than Prayer
Next Post