A new survey out today by the Pew Research Forum shows that more Americans than ever before (72%) think religion is losing its influence on society… and, for some reason, many of them think that’s a bad thing. 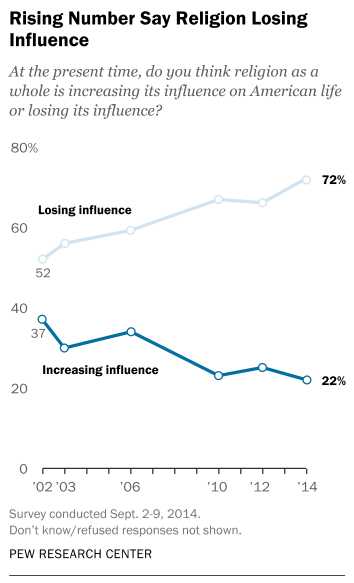 Don’t get too excited. What that’s saying is that a lot of Americans *wish* religion had more influence in society, but they worry because they don’t think it does.

In fact, there’s an upswing when it comes to Americans wanting their church leaders to endorse political candidates — completely in violation of the law — or express positions on social issues: 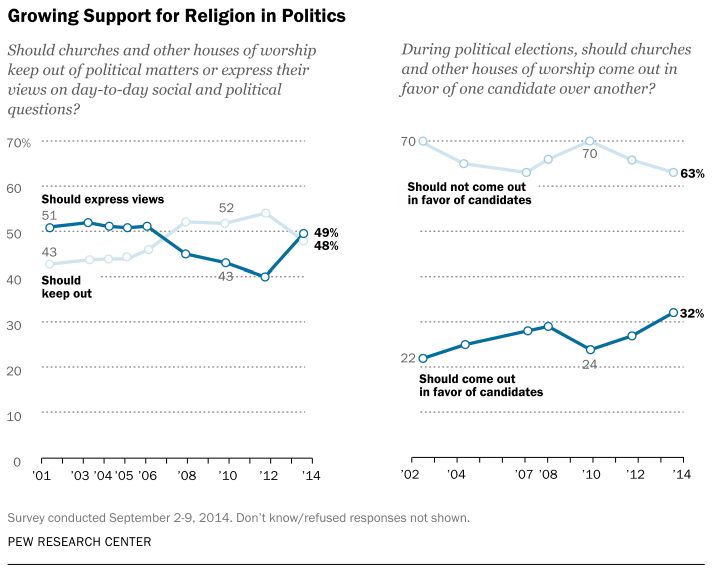 The findings reflect a widening divide between religiously affiliated Americans and the rising share of the population that is not affiliated with any religion (sometimes called the “nones”). The public’s appetite for religious influence in politics is increasing in part because those who continue to identify with a religion (e.g., Protestants, Catholics and others) have become significantly more supportive of churches and other houses of worship speaking out about political issues and political leaders talking more often about religion. The “nones” are much more likely to oppose the intermingling of religion and politics.

In case you need more proof that our nation’s values and priorities in this regard are completely misguided, the Pew researchers also asked people which groups were discriminated against. For example, 65% of Americans said there’s a lot of discrimination against gays and lesbians.

Only 27% of people, however, said atheists face a lot of discrimination. That’s a much lower number than it should be.

But you know who has it worse than us? 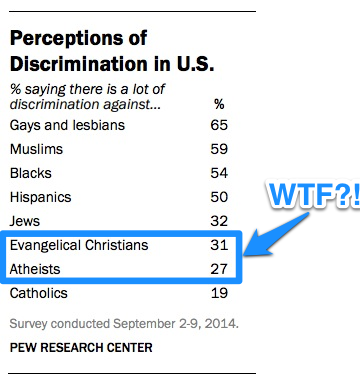 Yeah, it must be sooooo tough having all the power in the country… You know who else has it rough? White people. And men. And the rich.

I made a video not too long ago about just how good Christians had it in our country:

So how did that survey result come about? Part of it is that there are just more Christians in our country overall, and they’re the ones most likely to say that they have it rough. Which is kind of like the super-wealthy complaining about the taxes they have to pay. No matter what happens, at the end of the day, they’re still *way* better off than almost everyone else.

I dare anybody who really believes that evangelicals have it worse than atheists to perform a little thought experiment: I’m going to drop you off in a random part of the country and you’ll be wearing a shirt that makes very clear what your beliefs are. Would you rather wear a shirt that says “I love Jesus!” or one that says “Atheist and proud of it”?

I promise you you’ll be better off just about anywhere with the Jesus shirt.

If that thought experiment doesn’t do it for you, pick something else. My point is that, by nearly every measure you can think of, Christians have it pretty damn good. To say they are discriminated against at all, much less more than atheists, is ludicrous.

What counts as discrimination, anyway? That people sneer at them when they act like bigots? If anything, what you have are a bunch of Christians who consider themselves persecuted because it’s no longer politically correct for them to persecute other people.

Todd Stiefel, chair of the just-launched Openly Secular campaign, offered another interpretation of the data in a press release. He said the problem wasn’t so much that atheists were seen as less discriminated against than evangelicals, but that only a quarter of people felt we were discriminated against at all:

“It’s clear from today’s poll that people don’t realize the kinds of discrimination we face,” said [Stiefel]. “Our campaign clearly has a lot of work to do. The numbers reinforce the need to educate people about what it means when someone is nonreligious and the pattern of prejudice secular Americans face on a regular basis.”

There were a few other results from the survey worth mentioning:

When it comes to political parties, the Democrats have the Unaffiliated vote locked up: 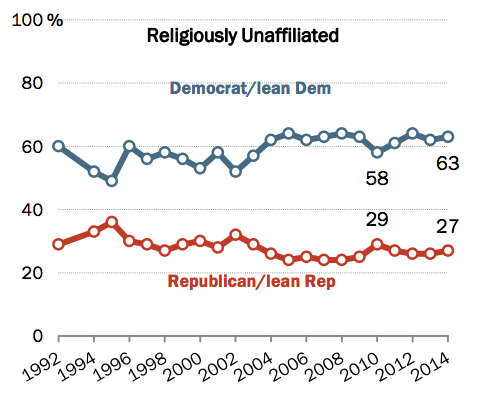 At the same time, those Unaffiliated Americans are the least likely to actually vote… 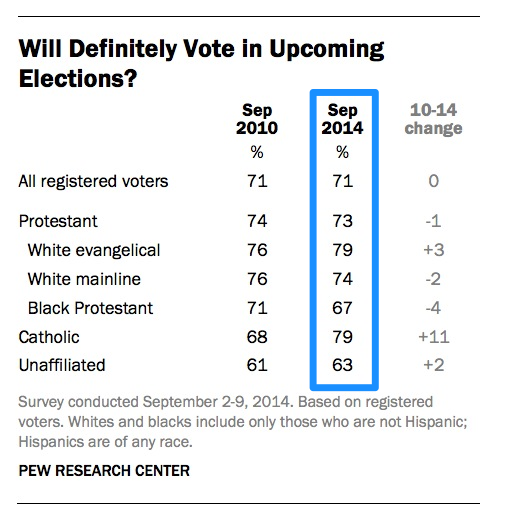 You would think this would give Democrats an incentive to reach out to the Nones so that we get off the Internet and go to the ballot box… yet they never seem to do that. There’s little online outreach and most Democrats are even afraid of identifying as non-religious. It’s pathetic. Meanwhile, Republicans have the White Evangelicals and (to a lesser extent) Catholics on their side — and those groups are far more likely to vote.

Man, if we could ever get our shit together, we’d be one hell of a political force.

The full report can be read here.