Arkansas State Officials Now Say Football Players Can Wear Crosses on Their Helmets If They Want To September 21, 2014 Hemant Mehta

Two weeks ago, Arkansas State’s football players were seen on TV with Christian crosses on their helmets: 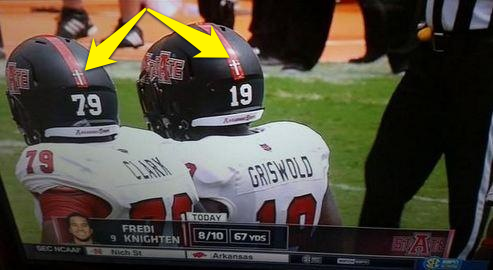 The crosses were there, we learned later, to honor a former player and manager, both of whom died earlier this year. But sentiment doesn’t mean you’re allowed to break the law. The Freedom From Religion Foundation sent a letter to athletic department officials warning them against using school-sponsored religious symbols on helmets, and Arkansas State quickly issued a press release saying those crosses would soon disappear:

“I am 100 percent in support of our coaches’ and players’ expression of faith, as well as their choice to honor the two individuals associated with our team who passed away by voluntarily wearing a cross decal on the back of their helmets. Unfortunately, we have received a complaint that use of the cross violates the Constitutional prohibition against separation of church and state.

“After consulting with University counsel, we have been advised to either modify the decal or remove it completely. Thus, in order to ensure that we are in full compliance with Constitutional law, we will be modifying the decal to still honor the two individuals who are no longer with us.”

Sounded like the right thing to do at the time. FFRF even sent school officials a thank you letter.

But then the Christian Right group Liberty Counsel stepped in, claiming religious persecution on behalf of one of the players. Because, as we all know, neutrality means persecution for Christians. (Does anyone think they would be defending the religious symbols if they were Jewish stars instead? Of course not.)

This week, school officials compromised with Liberty Counsel by just removing themselves from this whole equation:

After some negotiation between the school and the Liberty Institute, the football players have now won the right to display the cross decals if they wish, as long as nobody from the university buys them or sticks them on their helmets for them. The boys will have to put their own cross stickers on their gear, all by themselves…

So they traded school-sponsored religion for student-led peer pressure. It’s legal, but not necessarily better.

In case you’re wondering, the NCAA rulebook doesn’t appear to have any prohibition on the crosses, only saying:

Persons or events may be memorialized by an insignia with an area not greater than 2.25 square inches on the uniform or helmet.

I think this sets a bad precedent even if it’s allowed. Letting students put religious symbols on their helmets can easily get out of control — just wait until local churches start sending cross decals to every football player in the state.