I Think This Public Elementary School in Texas Just Set the Record for Most Church/State Violations September 20, 2014 Hemant Mehta

The staff members at China Elementary in Texas’ Hardin-Jefferson Independent School District love children, and Jesus, and not necessarily in that order.

If you look at their website and social media, it seems like they promote Jesus every chance they get, mostly with the school’s illegally-teacher-led “Hawks for Christ” group which they promote nonstop on their Facebook page (some of which have since been deleted). There’s also the Duck Dynasty dress-up day they had last year and the school song which includes the words “God bless.” 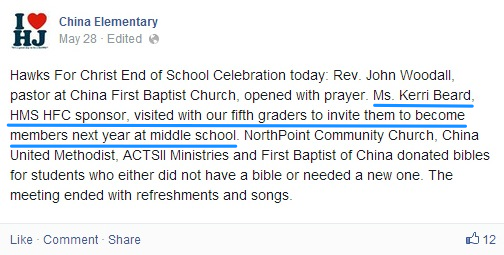 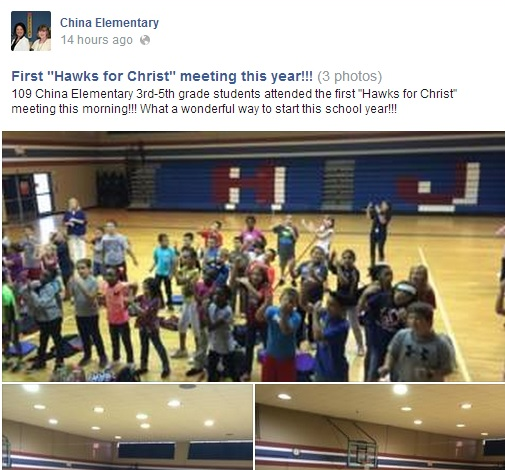 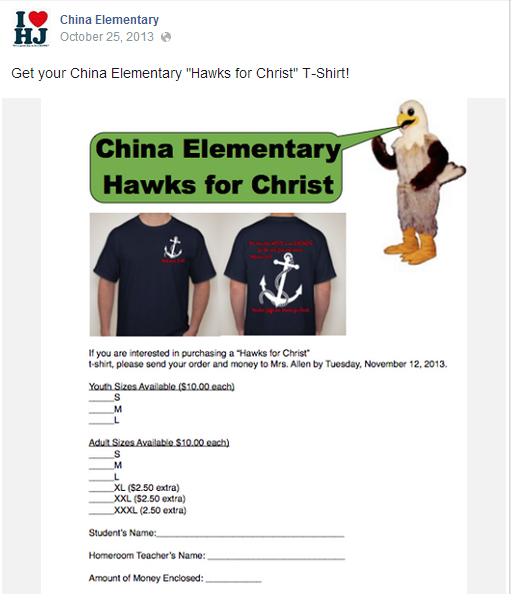 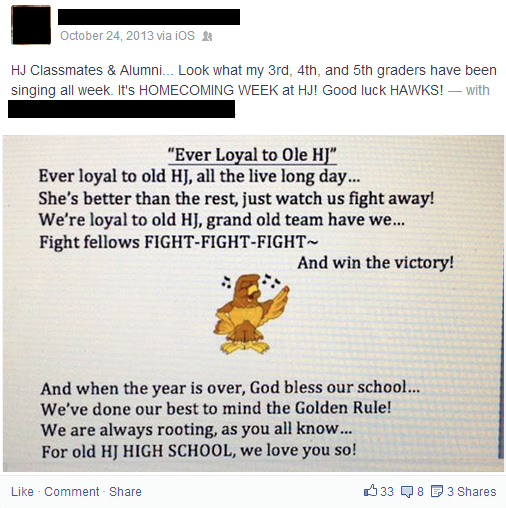 Seriously, how many church/state violations can one school have?

(Just for the record, the person who contacted me sent me a folder with about 50 screenshots including the ones above. It’s that crazy.)

The Freedom From Religion Foundation sent a letter to district officials yesterday calling them out on all of this. Not only did attorney Sam Grover point out another violation, he clearly didn’t even bother mentioning some of the minor ones just to save space:

We understand that teachers lead and take regular part in Hawks for Christ meetings. Under the Establishment Clause, public school employees cannot asking students to pray or lead religious activities while acting in their official capacities as District employees. Similarly, public school employees cannot distribute, sell, or wear religious T-shirts while at school. Public schools have a duty to ensure that “subsidized teachers do not inculcate religion” or use their positions of authority to promote a particular religious viewpoint… If the District turns a blind eye to religion promotion at China Elementary, it becomes complicit in an egregious constitutional violation.

The real problem here is that, with all the promotion, little kids are going to think their school is promoting Christianity. They will feel coerced into participating because it’s what the trusted adults at school seem to want them to do. They shouldn’t be put in that position.

Because Hawks for Christ is a teacher-led group, FFRF is asking the District to disband it. They also want assurances that students won’t be subject to teachers’ religious beliefs in the future, whether through promotion of Christian events or their Hawks for Christ clothing. They’re also asking the District to speak to Hardin-Jefferson High School athletic director Dwayne Debois since flyers for a Fellowship of Christian Athletes event say he’s in charge of it and that’s illegal. (All religious groups and events must be student-led.)

It’s rare to see one district guilty of this many religious violations, much less one school. They’d be smart to just fess up, fix everything, and get back to teaching students things they actually need to learn.

September 20, 2014
Former NFL Punter Chris Kluwe and Congressman Barney Frank Among Those Coming Out as "Openly Secular" in New Campaign
Next Post