Another high school, another football coach who can’t keep his faith to himself.

This time, Tom Brittain (below), the head varsity football coach at Tempe Preparatory Academy in Arizona, told his players to pray after a big victory and joined in with them as well — both of which you’re not supposed to do: 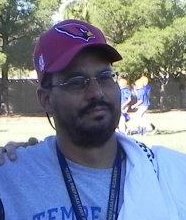 “He (Brittain) directed students to lead a prayer and he joined the students in that prayer and did so in view of everyone,” said [TPA headmaster Dr. David] Baum. “I think I preserved the religious freedom of our students, who have to have the liberty to be able to practice or not practice their religion on our campus, without interference by adults.“

Brittain was suspended for two games, which seems like a fair punishment since it’ll hopefully stop him from breaking the rules again. Good for Baum for doing the right thing, even though I’m sure he’s getting a lot of flak for it.

As you might expect, some parents aren’t taking the news very well:

Another parent claimed that Brittain had been pushing prayer on his players for some time now, so maybe Baum took action on his own before he was forced to by a group like FFRF.

In any case, this is the model for how an administrator should act when an overzealous religious coach oversteps his bounds.

September 20, 2014
An Atheist-Turned-Christian Responds to Those Who Are Trashing His Book
Next Post