Should Atheists Be More Confrontational When Giving Secular Invocations at Government Meetings?

This is a guest post written by PJ Crepeau. Crepeau is a sculptor, writer, and filmmaker from Denver, Colorado.

Since Greece v. Galloway, atheists have seized the opportunity to deliver secular invocations, at least in those places where city officials have permitted the airing of a non-religious point of view. These people should be praised for participating in local government meetings as equals to religious invocation givers, and I salute them for their courage and passion.

But I’m not a fan of their speeches.

Every video of these “secular invocations” shows an atheist taking great care to be inclusive and inoffensive. Such invocations are clearly in the spirit of Humanism, no doubt, and it says a lot about the person speaking. While I respect this approach, I suggest that we carefully consider what we wish to achieve with such invocations, because I worry we’re selling ourselves short.

When Christians give an invocation for a city council, they inevitably proclaim the truth of their beliefs: that there is a God who rules the universe, that He had a son, etc. There are constant references to “our” God — as if their beliefs represent everybody in the community.

But when atheists give an invocation, they never make any such proclamations about their worldview. They never say that they don’t believe in any gods (or souls, angels, demons, Heaven and Hell). Sure, they might mention that they are atheists, but they won’t say that they don’t believe God exists. It’s obvious why: many Christians would likely protest (by booing or heckling). Even worse, they might just walk out. Such a declaration would make many religious people feel like outsiders, and I suspect most Humanists wouldn’t want to put them in that position.

Think about this, though: What is the purpose of these secular invocations? We want to get rid of them altogether. People of all beliefs may be able to give invocations, but we’d much rather do away with them and have the city councils get down to business. By making our invocations as blandly non-confrontational as possible, we not only give tacit sanction to an unacceptable status quo, but we also ensure that boldly non-inclusive Christian prayers will continue to proclaim untruths, ones that will go unchallenged in the same venue.

To put it another way, when atheists are granted the chance to lead invocations, we have an opportunity to put the Christian majority in a very uncomfortable place. Why should we squander it?

Look at how the Freedom From Religion Foundation has dealt with the similar issue of messages publicly displayed in government buildings in December. When given the chance to offer a counter-message to the proclamation that Jesus Is Real, FFRF pulls no punches, displaying an engraved plaque proclaiming the falsity and emptiness of religious beliefs: 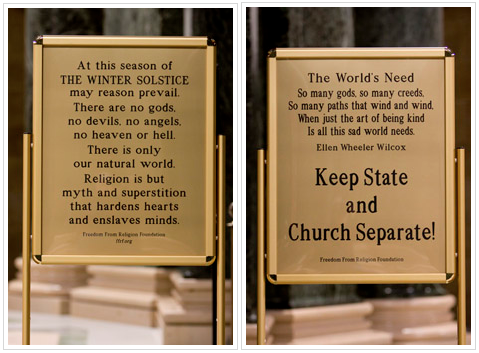 It’s tit for tat: If Christians post an untrue statement about reality, we will post a correction. If you don’t want our message posted in a government building because you don’t like what it says, then yours has to go, too.

Here’s an example of the sort of invocation I’m talking about:

“We all live in a godless universe, but only we atheists acknowledge this fact. We have no eternal souls; those are just a myth. When we die, all experience ends, as if the universe died with us. But in spite of this, we push on. We know we have an obligation to make the world a better place, because everyone who shares this planet with us has only this one life, just like us. I encourage our city council members to make the most of this meeting and make the lives of those in this community even better.

It may not win us many friends, but I believe this approach would help eliminate invocations at government meetings altogether. Might there be protests and walkouts? You bet there would be! But if those who give the invocations are careful not to attack specific religions or their followers, they would have a strong defense that they were merely doing what Christians do during invocations all the time — proclaiming their sincere beliefs.

Then, and perhaps only then, would local officials bring a swift end to such invocations.

[Note from Hemant: The opinions expressed here don’t necessarily represent my own, but they’re very interesting to think about.]

September 19, 2014
Sufi Holy Man Is Arrested For Killing Volunteer He Failed to Bring Back to Life During Promised 'Miracle'
Next Post