Researchers Who Studied Seeing Jesus in Toast Awarded for Their Work… Sort Of September 19, 2014 Hemant Mehta

At yesterday’s annual Ig Nobel Prize ceremony at Harvard, where hilarious-but-very-real research is celebrated, a team of Chinese and Canadian scientists won the neuroscience prize for their work titled “Seeing Jesus in toast: Neural and behavioral correlates of face pareidolia“: 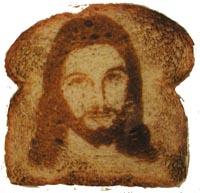 Researcher Kang Lee accepted the award on behalf of the team:

Lee, a developmental neuroscientist, and his team of researchers found that such recognition is normal and based on how the brain interprets and makes sense of visual stimuli.

“I think probably this is first time we are actually telling people: ‘This is OK for you to see Jesus on toast,'” he said.

I’m still partial to atheists who see the Big Bang in their bread.

(Thanks to Christopher for the link)