He’s especially angry with Mikey Weinstein of the Military Religious Freedom Foundation for writing a letter to the Secretary of Defense defending atheists. (For what it’s worth, there’s no evidence that Weinstein’s letter was the one that caused the Air Force to change its policy, but it undoubtedly helped.) 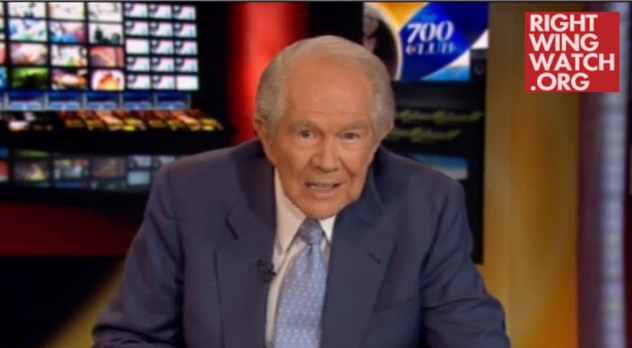 There is a left-wing radical named Mikey Weinstein who has got a group about ‘people against religion’ or whatever he calls it, and he has just terrorized the Armed Forces. You think you’re supposed to be tough, you’re supposed to defend us, and you’ve got one little Jewish radical who is scaring the pants off of you.

You want these guys flying airplanes to defend us when you’ve got one little guy terrorizing them? That’s what it amounts to. You know, we swear oaths, ‘So help me God,’ what does it mean? It mean’s that with God’s help — You don’t have to say you believe in God, you just have to say you want some help beside myself with the oath I’m taking. It’s just crazy. What is wrong with the Air Force? How can they fly the bombers to defend us if they cave to one little guy?

And what’s with Robertson saying, “You don’t have to say you believe in God”? Signing the oath is admitting exactly that! Remember: All the other branches of the Armed Forces made “So Help Me God” optional a long time ago. The Air Force is only now falling in line with them. So why isn’t Robertson complaining about the other branches?

The Air Force agreeing that service members’ religious beliefs shouldn’t preclude them from enlisting isn’t “caving in.” It’s making us stronger. It’s what they should have been doing all along.

I called up Weinstein to see if he had anything to say in response to Robertson — as if he ever didn’t have something to say — and he was even more blunt than usual:

“Pat Robertson is to human dignity and sanity and integrity and character what dog shit is to a fine French restaurant on the menu.”

Unquote. I’ve had many phone conversations with Weinstein over the years, but never one that quick. He knew exactly what he wanted to say.

September 18, 2014
Exploring Awe as the Source of the Sacred
Next Post

September 18, 2014 Ken Ham is Writing a Tell-All Book About His Debate with Bill Nye
Browse Our Archives
What Are Your Thoughts?leave a comment