For a while now, atheists in Rowlett, Texas have been wanting to deliver an invocation at a city council meeting. After Greece v. Galloway, that should be a given. However, local leaders refused to change their policy. Mayor Todd Gottel said last week, “As long as I’m mayor, we are going to pray,” meaning to hell with any secular invocations.

Last night, the Metroplex Atheists Rowlett held a protest outside city hall to draw attention to the discrimination they’re facing: 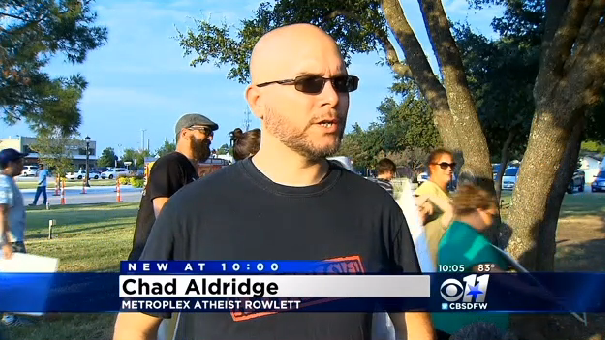 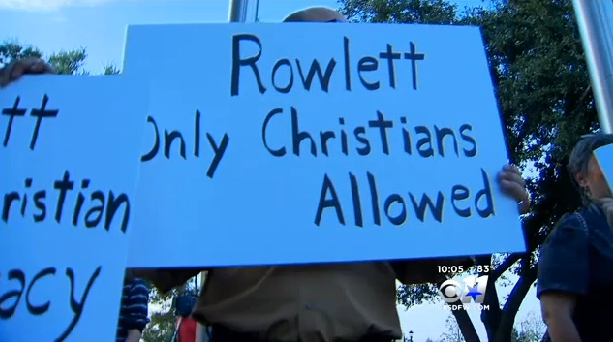 The city says invocations should only be delivered by a member of a religious congregation with a presence in the local community. By definition, that excludes atheists. It also means the invocation will be Christian virtually every week:

“But we are established here. We have an address, resident meeting, and an adopt-a-street for more than a year and a half now,” Metroplex Atheist member Randy Word.

What more does the city want? What they’re doing is illegal and will undoubtedly end up costing taxpayers money when they lose their legal battle, so why put the town through that? How irresponsible and tunnel-visioned are these council members?

Well, their public statement gives you an answer to that:

… The city released the following statement:

“We will continue to abide by this policy, which is intended to acknowledge and express the council’s respect for the diversity of religious denominations and faiths.”

Diversity doesn’t count when you exclude the least-liked group.

This council has no respect for diversity. And the Christian residents don’t seem to give a damn, either.

There’s no word yet on what the atheists’ next step will be.

September 17, 2014
This is the Satanic Coloring Book That Will Be Available for Florida Students Thanks to Proselytizing Christians
Next Post

September 17, 2014 Are Men More Likely to Be Secular Than Women?
Browse Our Archives
What Are Your Thoughts?leave a comment