These Cheerleaders Are Leading Prayers Before Football Games Because Screw You, Atheists, That’s Why September 16, 2014 Hemant Mehta

These Cheerleaders Are Leading Prayers Before Football Games Because Screw You, Atheists, That’s Why

Oneida High School in Tennessee used to announce prayers over the public address system before football games, in direct defiance of a Supreme Court decision banning such school-sponsored activities, but that’s since changed after the ACLU and FFRF wrote letters to TN districts warning them of the legal problems:

Kevin Acres sits in the booth for every Oneida High School home game. This year, his repertoire will be missing something — the pregame prayer.

“Far as I know we have been playing football here since 1930 and been praying ever since,” said Acres.

A couple of years ago, [the Tennessee Secondary School Athletic Association] asked schools to stop announcing prayers over the PA, but Oneida bucked the order and kept the prayer in the pre-game.

“We just felt as long as no one here locally complained, we can continue to do it,” said Acres.

That went on until this season. The school started feeling pressure from outside groups to end that religious tradition, so they replaced it with a moment of silence.

“I heard the moment of silence, but it was kind of a sick feeling in my stomach,” said head football coach Tony Lambert.

But that’s when the school’s cheerleaders stepped in. Unable to handle a moment of silence, they figured they would lead prayers during that time instead: 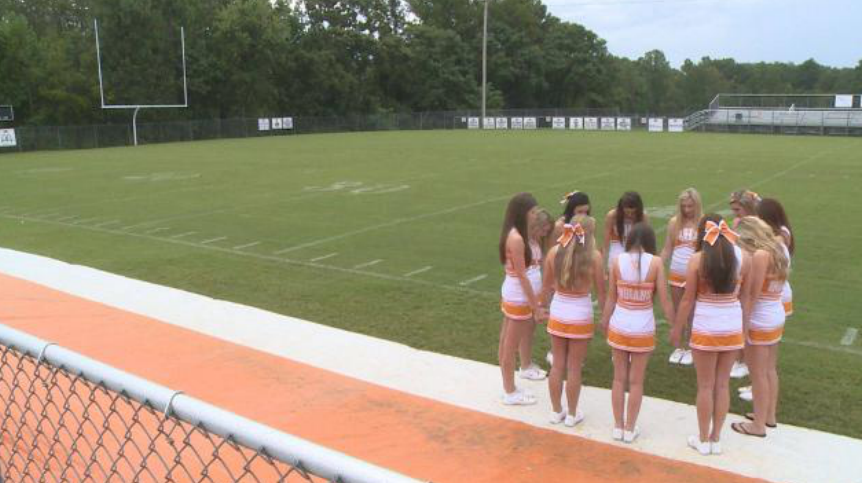 “He called for the moment of silence and I started off, ‘Our Father who art in heaven’ and everyone joined in,” said [cheerleader Asia] Canada.

Even the visiting team’s cheerleaders and fans joined in.

And it has become a tradition before every home game…

You know what? That’s fine. As long as the school isn’t sponsoring or supporting it, the cheerleaders can do that. It’s an arrogant move, to be sure, since they’re just assuming everyone else believes in the same God they do, but it’s not like religious tolerance is a hallmark of the South.

For a group that’s supposed to unite the crowd, this is about as divisive as they can get.

Maybe during halftime, they can use this cheer:

September 16, 2014
An Open Letter to the Yale Muslims and Humanists Who Opposed Ayaan Hirsi Ali's Speech
Next Post

September 16, 2014 In Funny or Die Clip, Bill Maher Admits the Whole "Atheism" Thing Has Been an Act to Raise Money for Churches
Browse Our Archives
What Are Your Thoughts?leave a comment