The Same People Who Say Their Religious Freedom is Under Attack Held a Rally to Put God Back in Public Schools September 16, 2014 Hemant Mehta

Over the weekend, hundreds of Christians gathered in Hartsville, South Carolina as part of a rally to put God back in public schools. 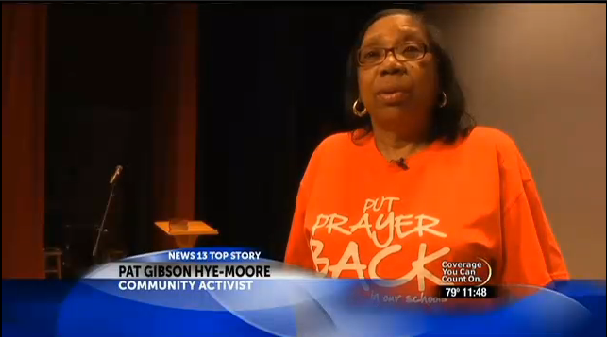 To state the obvious, God never left their schools. Christians are welcome to pray in public schools all they want. What’s not allowed is school-sponsored prayers, like teachers leading prayer in the classroom, prayers said over the public address system at football games, shout-outs to Jesus by principals during graduation ceremonies, etc.

But try telling that to the ignorant masses at this rally:

“We’re taking God out of everything,” lamented Hye-Moore. “We are taking the Creator, the one that created everything, we’re just trying to kick Him out and He’s not happy with that.”

I’m sure He’s crying about it as we speak…

These Christians act like everything wrong with the public school system today can be traced back to a 50-year-old Supreme Court decision. As if there were no problems before that. As if prayer will be the solution to poverty, the achievement gap, teacher evaluations, and student apathy.

This is why we shouldn’t take them seriously. They have no clue what the law currently says or what they really want. If the Muslim God were allowed back in school, for example, they’d be holding another rally about that. Because they don’t want any God in school. They want their God in school. They don’t give a shit about non-Christians — or even other Christians who believe religion should be a private matter.

Another rally is scheduled in Columbia, SC soon.

September 16, 2014
A Creationist May Become Florida State University's Next President
Next Post

September 16, 2014 An Open Letter to the Yale Muslims and Humanists Who Opposed Ayaan Hirsi Ali's Speech
Browse Our Archives
What Are Your Thoughts?leave a comment