Enid, Oklahoma resident Shawna Hammond is an atheist and a Pastafarian. When it came time to renew her driver’s license earlier this month, she made the decision to wear a colander — her religious headwear — in her photo. The choice was met with giggles but not disputed at the time: a colander might be unorthodox, but it is the religious headwear of followers of the Church of the Flying Spaghetti Monster. 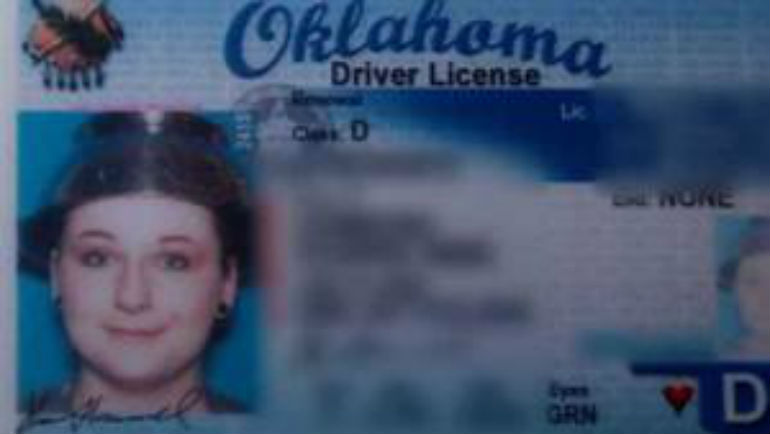 Hammond explained her decision to wear a colander as being an important expression of religious freedom:

“For me the colander represents freedom, our freedom of religion, and to whatever religion we prefer or lack of religion. It was important to me to exercise that, even if it’s just a driver’s license photo.”

However, since the photo was taken,

[o]fficials with the Oklahoma Highway Patrol are… doing a review of the photo to make sure it follows state guidelines.

Since the “rules for religious headwear in driver’s license photos state that the face area must be clear and not covered by shadows,” and the photo pretty clearly complies, it doesn’t seem that there’s any cause to rule against her.

It is worth noting, however, that it seems authorities might might not be big fans of Pastafarian headwear since they’re now thinking about revising the headwear rules:

If it does follow the rules, authorities say they may look at changing the rule of religious headwear because it is more than 10-years-old.

Maybe this is just a matter of confusing phraseology… but, if not, it seems odd to make revision of the rules (if it’s actually related to age) contingent on whether or not Hammond’s photo complies with those rules.

We reached out to Hammond earlier this week to get a more detailed explanation of her motivations but haven’t heard back as of this writing.

September 13, 2014
Florida School Board Member Tells Pagan He Can't Deliver an Invocation Because It Might Offend the Audience
Next Post

September 13, 2014 Tennessee Dept. of Children's Services Commissioner Says Religion is the Only Foolproof Form of Rehabilitation
Browse Our Archives
What Are Your Thoughts?leave a comment