This week marked the launch of a welcome new group to the broader conversation about religion and marriage equality: Evangelicals for Marriage Equality:

As Evangelicals for Marriage Equality, we believe you can be a devout, Bible-believing evangelical and support the right of same-sex couples to be recognized by the government as married. Our commitment to following Christ leads us to speak out for equal treatment under the law for others — whether or not they share our religious convictions.

Good for them. They’re not saying evangelical churches should perform or recognize the marriages, only that the government should. You have to wonder why so many evangelical leaders have such a hard time getting behind that.

But organizers have already hit a problem. In order to publicize the group, they planned to purchase a full page ad (seen below) in three major Christian publications: Christianity Today, Relevant, and World Magazine. 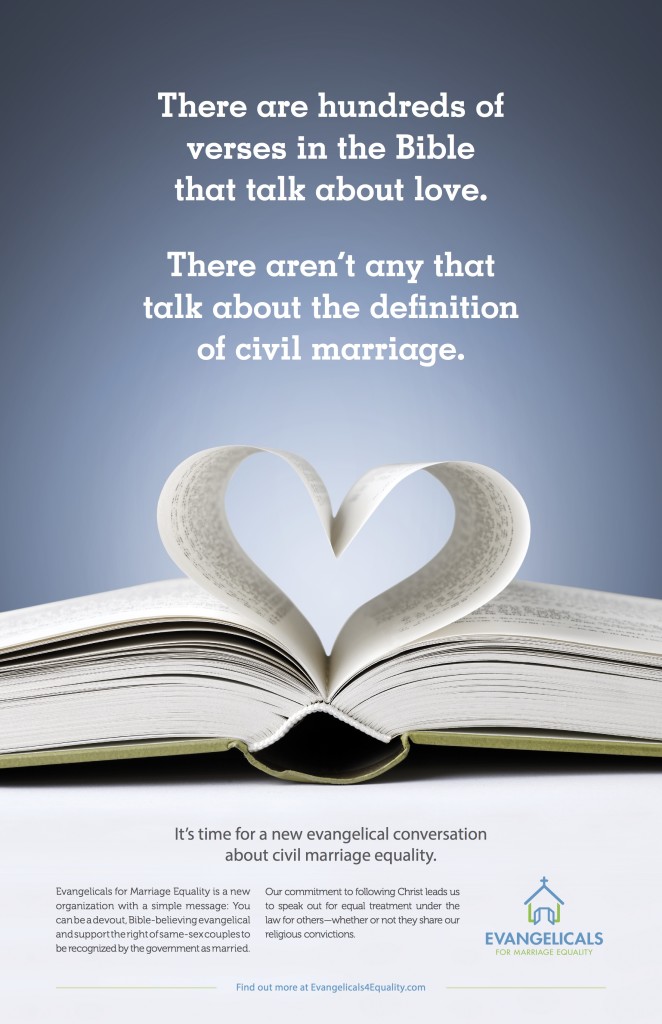 All three rejected the ad:

Our first stop was Christianity Today, perhaps the country’s most prominent evangelical-focused print publication. CT rejected the ad, with the editor providing the following reason: “The reason is that the ad advocates a position that we have editorialized against.” So much for a “Chinese Wall” between the editorial staff and the advertising team.

Next stop: Relevant magazine, whose focus on pop culture gives them a younger readership and (we thought) an increased likelihood to run the ad. Instead, the word from the publisher was that the “ad was not approved based on political issues.”

Finally, we approached World Magazine about running our ad. Having only seen our organization name, World told us that they would “pass on the opportunity.”

It’s not the first time something like this has happened. In 2011, when the group Believe Out Loud, which “promotes LGBT-inclusion in the Christian church,” wanted to place ads in the heretic-level-liberal Christian publication Sojourners, Jim Wallis‘ organization rejected them because “Sojourners position is to avoid taking sides on this issue. In that [case], the decision to accept advertising may give the appearance of taking sides.”

And those were the “progressive” Christians…

Jonathan Merritt, writing at Religion News Service, thinks the publications made the right call this week in rejecting the newer ad:

Were these publications justified in rejecting this advertisement?

The simple answer is “yes.” And it has nothing to do with the truthfulness of the ad’s message or the lack thereof. Rather, these are independent evangelical publications who hold to a particular view of marriage. They have audiences with expectations about what is and isn’t consistent with a Christian worldview. And they should be free to only publish content that is consistent with both.

I don’t necessarily disagree with him. But I think the decision of the publications says a lot about where evangelical Christians are today: They’re so full of animosity against even the suggestion that gay people deserve equal rights in the eyes of the government, they can’t allow fellow evangelicals to say as much in their pages. No one’s asking them to change their views on homosexuality, or whether it’s sinful, or whether the church should support it. Evangelicals for Marriage Equality is asking Christians to do pretty much the least they can do.

So much for “love the sinner.”

I’m sorry, but a conservative publication should not be shamed for rejecting an ad that flies in the face of their convictions and beliefs. And, similarly, a liberal organization committed to marriage equality should be free to rescind a speaker’s invitation when they learn the speaker holds to a divergent position.

That’s a point I might agree with if the publications would be open about their political and social views.

Christianity Today claims that its distinctiveness is based, in part, on the idea that it has “a humble discontent with the status quo.”

Relevant says the same thing: “We try to publish ideas that break stereotypes, challenge the status quo and spur a generation to know God more…”

Merritt then tries to take a middle ground here that is just unacceptable:

Those on the left must stop labeling anyone who holds to a traditional Christian sexual ethic a “bigot” or “hater.” Those on the right must quit claiming that everyone on the left is a “heretic” or “doesn’t believe the Bible.” It is critical that Christians on both sides of the sexuality debate make their cases with winsomeness and grace.

But we’re not talking about a legitimate disagreement. We’re talking about civil rights and people who oppose them. To be clear, I don’t give a damn how the church sees homosexuality. If church leaders want to continue treating LGBT people like they’re deviating from “God’s Plan,” that’s their problem. They’ll continue to lose followers and I’ll be thrilled to watch their numbers drop. But for the government to do the same thing? That’s inexcusable. No decent person should be okay with the government treating same-sex couples any differently from straight ones, and that includes people of faith.

If you’re against loving, consenting adults getting married and having equal rights because you think your religious beliefs ought to trump their happiness, what else am I supposed to call you?

Evangelicals for Marriage Equality shouldn’t even have to exist because what they’re asking for should’ve happened a long time ago. The fact that Christian gatekeepers continue to keep them out of the conversation is a testament to why they need to keep fighting.

To respond to Merritt then, who wants to see a graceful conversation between “both sides of the sexuality debate” within Christianity, that’s not even a possibility when one side — the side with all the power — refuses to even acknowledge the other side through a purchased advertisement. Far from being an editorial admission that they were wrong, running the ads would only show that the evangelical tent isn’t quite so tiny.

Keep in mind that the ads we’re talking about aren’t even challenging what evangelicals have traditionally said about homosexuality. They’re literally saying let’s have a “new evangelical conversation about civil marriage equality,” not “You’re all wrong if you oppose marriage equality.”

It’s disappointing how quickly they were rejected, but it’s hardly surprising.

September 12, 2014
This Week, an Appeals Court Heard Arguments to Reinstate Tax-Free Housing for Pastors
Next Post