Teacher Physically Lifts First-Grader Out of His Seat Because He Won’t Stand for the Pledge September 12, 2014 Hemant Mehta

If there are ever problems when a student doesn’t stand for the Pledge of Allegiance, it’s usually involves a teacher making a snide comment about it or threatening punishment.

But until now, I’ve never heard of a teacher physically lifting a student out of his seat because he wouldn’t stand up. That’s what happened to a first-grader in the New Town Public School District in North Dakota, according to the American Humanist Association’s Appignani Humanist Legal Center: 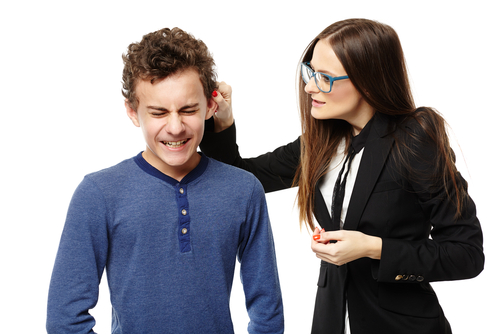 When the child has attempted to sit out the Pledge, however, he has been instructed by his teacher to stand — even physically lifted out of his chair – at the risk of disciplinary or retaliatory measures if he refused to stand. When [parents Jesse Moore and Kristina Leiffer] intervened to point out that their child cannot be forced to stand, their concerns were treated dismissively by both the teacher (a Mrs. Miller) and, subsequently, by [Principal Daniel] Anderson. In fact, to make matters worse, the child has now been instructed to stand outside the classroom — a public reprimand and humiliation that is totally unwarranted and unlawful — during the Pledge exercise.

According to the AHA, the parents contacted them because of their “Don’t Say the Pledge” campaign, a sign that the project is at least reinforcing the current law if not yet encouraging more students to remain seated.

I can’t wait to hear the school’s response to this one… in what world is it ever okay to touch a student like that? And for that reason?! It’s completely out of line.

September 12, 2014
Do Religious People Have Better Morals Than Non-Believers? Study Says Neither Side Has the Edge
Next Post

September 12, 2014 Even a Right Wing Attorney Says the Air Force Shouldn't Reject an Atheist Who Disagrees with "So Help Me God" in Oath
"Did he at least get to geschlechtsverkehr the girl?"
James Parson (DHMO powered) Woman Injured After Falling 20 Ft. ..."
"She's a doctor who lied to him about WAP, and apparently is having an affair ..."
persephone For Many Christian Women Raised in ..."
"If it gets me a ride off this rock, I can take a little anal ..."
cdbunch Woman Injured After Falling 20 Ft. ..."
"Medical professionals shouldn’t have to risk their jobs and their careers to provide appropriate medical ..."
San_Ban Why Catholic Hospitals Are Bad for ..."
Browse Our Archives
What Are Your Thoughts?leave a comment