In 2007, just before taking part in a debate on Nightline, Creationist Kirk Cameron went on The O’Reilly Factor and explained that evolution was nonsense because there were no transitional fossils to be found.

He went on to claim that, if evolution were true, we would see a hybrid between a crocodile and a duck. 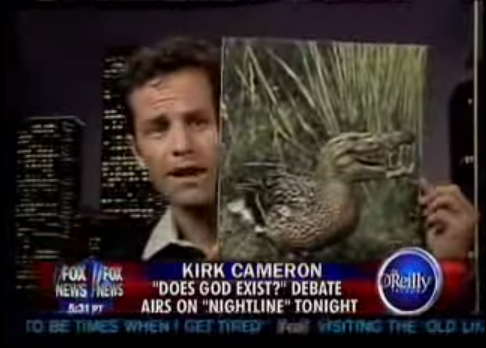 No crocoduck? Therefore, no evolution.

The typical reaction was that Cameron didn’t understand what transitionals fossil were, or that plenty of them exist, or how you can’t just create a mashup of two creatures and expect a half/half hybrid to have existed. That’s not how evolution works.

But then the scientists came along…

[University of Chicago paleontologist Paul] Sereno is part of a team of researchers that was finally able to reconstruct Spinosaurus in full using newly discovered fossils and information gathered from the dinosaur’s initial discoverer, a German paleontologist named Ernst Stromer. According to their reconstruction, published today in Science, Spinosaurus aegyptiacus was a gigantic fish-eating, water-paddling marvel; one that, in Sereno’s words, was “a chimera — half duck, half crocodile.”

I anxiously await his response, though we all know what he’ll say. He’ll claim we need to now find a duck/crocoduck hybrid… which I think would be 75% duck and 25% croco… oh, screw it.

He was wrong several years ago, and even his bullshit argument has been thrown back in his face. But he’ll never admit it because his thinking is independent of what the evidence shows. That’s the problem with Creationists.

(Thanks to Heidi for the link)