13 Years Ago, the Twin Towers Fell to Religious Fanaticism. Here’s Fearless Footage of What It Was Like on the Ground September 11, 2014 Terry Firma

13 Years Ago, the Twin Towers Fell to Religious Fanaticism. Here’s Fearless Footage of What It Was Like on the Ground

Mark LaGanga is as brave as the first responders he captured on September 11, 2001. LaGanga, a video journalist with CBS, was driving down Manhattan’s West Side Highway when a real-life Armageddon unfolded before him. So he did his duty. He grabbed his camera and walked straight into the nightmarish cityscape of that dreadful day.

There are many parts that are unforgettable. At 16:59, a bedraggled WTC worker named Mike Benfante recounts how he carried a wheelchair-bound woman down 68 flights of stairs. At 17:42, another dazed survivor declines to be interviewed, saying only, “I’m having a real bad day,” before slumping off, dragging a bag behind him that carves a trail into the thick layer of dust and ashes that has already formed on the pavement.

Then, seconds later, the second tower collapses, pushing a toxic, impenetrable ash cloud in LaGanga’s direction as people run past him left and right. What does he do? He holds his gaze and his camera steady, wipes down the lens, and keeps filming.

Throughout the video, you’ll hear chirping two-tone alarms, which, LaGanga later learned, is the sound of the personal alarms that firefighters have on them. The alarms go off when the person who carries them lies down and doesn’t move for a while.

Ponder what that means.

If the heartbreak and devastation doesn’t become clear enough from LaGanga’s incredible video, this YouTube footage of desperate people jumping out of the burning buildings should drive home the horror visited upon innocents by Islam’s finest warriors. No blood and gore are shown, but that doesn’t diminish how upsetting these images are. Proceed at your own risk.

The scene that somehow affected me the most is at 2:47: A young firefighter violently winces after he follows a falling human being with his eyes and the person splatters apart, outside of the camera’s frame, in front of him. 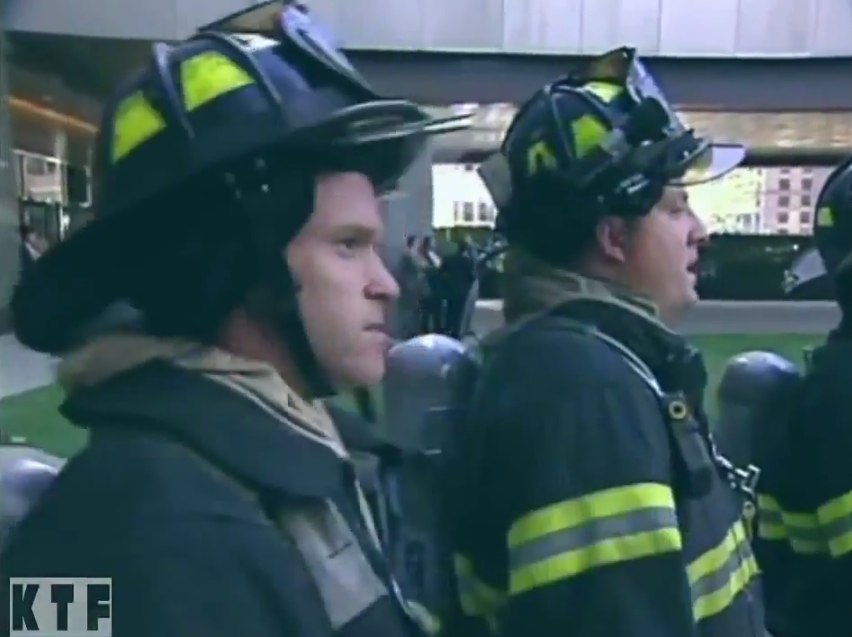 I’m no ghoul, but I think we ought to keep these visuals in mind to remind ourselves of the evil that is religious fanaticism. It doesn’t just happen in Iraq or Syria. Thirteen years ago, Islamists brought the fight to the streets of America. More carnage in Allah’s name will follow. And more Americans will, without hesitation, rush into harm’s way to aid the afflicted — and document what’s been done to them. My hat’s off to them all.

September 11, 2014
Bill Maher Discusses the Problem with Islam on Charlie Rose
Next Post