Humanist Group Comes to the Defense of Missouri High School Student Reprimanded for Sitting During the Pledge September 10, 2014 Hemant Mehta

Just days after launching their campaign encouraging students to not say the Pledge of Allegiance, the American Humanist Association is already putting its legal team to work.

At Lutie High School in Theodosia, Missouri, a student didn’t stand for the Pledge because of the “under God” phrasing in it. She sat quietly and didn’t disrupt the other students. But her teacher still called her out on it:

… [the student] has attempted to simply sit at her desk during the exercise in an undisruptive manner. When she has done this, however, she has been instructed by her teacher to stand, at the risk of disciplinary or retaliatory measures if she refuses to do so. Other students have been similarly pressured in the same classroom. Moreover, in front of classmates, these students have been told by the teacher that failure to stand for the Pledge is disrespectful to America and to military personnel in particular, and thus their patriotism and national loyalty have been publicly called into question.

To be clear, there’s no threat of a lawsuit, but a warning that this district has done a poor job informing teachers of what’s allowed and not allowed regarding the Pledge in the classroom.

And then, just to dig the hole a little deeper, it turns out the district provided firearms training to faculty members (!) using a company that proudly proclaims the Christianity of its owners (!!!): 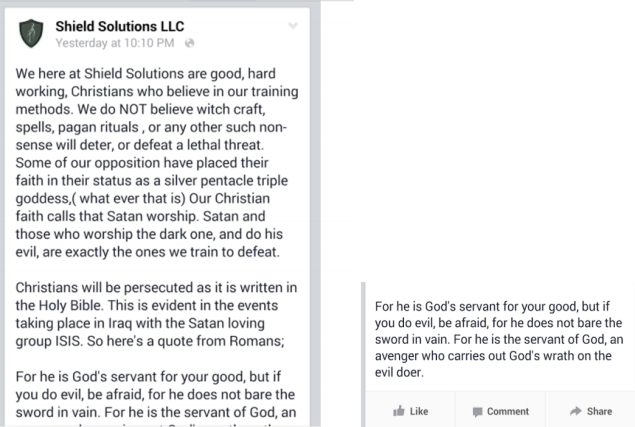 The company has since taken down its Facebook page.

As you can see, the writer above, from the company that has trained Lutie staff, advocates not only a Christian worldview, but one that seems to see the world in stark terms of good and evil with a strong sense of persecution and militancy. For a teacher to intimidate a student for Pledge nonparticipation under any circumstances would be inappropriate, but for a potentially armed teacher to do so, having been trained by a company with this outlook, is even worse.

That’s not to say the training provided involved religious proselytizing in any way, but how many dots to you need to see a pattern?

The AHA is asking the school to remind students they may remain seated during the Pledge without punishment.

September 10, 2014
Atheist Politicians in Arizona Speak Out Against Governor Jan Brewer's "Office of Faith and Community Partnerships"
Next Post

September 11, 2014 At Least They Didn't Do a Parody of "Anaconda"...
Browse Our Archives
What Are Your Thoughts?leave a comment