Good Riddance to a Public School Teacher Who Couldn’t Keep His Religious Beliefs to Himself September 10, 2014 Hemant Mehta

John Osborne (below) has finally decided to quit teaching, and it’s about damn time.

The history teacher had worked at Sequoyah High School in Canton, Georgia for 13 years, but he decided to leave when he realized that his classroom was not a substitute for church and that he wouldn’t be allowed to talk about Jesus: 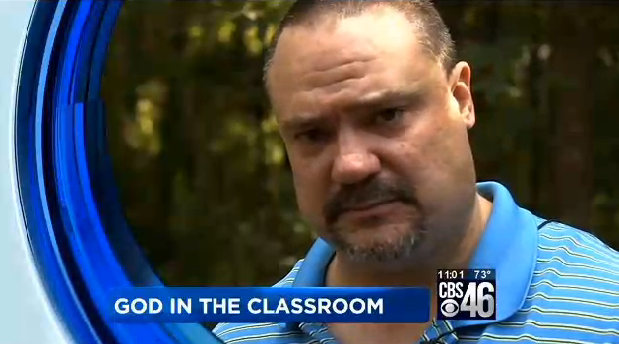 On Friday, he told the principal he had enough with the districts politics and put in his leave. He was frustrated that he couldn’t talk to his students about God and Jesus Christ.

“I teach world history so there is a lot of talk about religion and really all I want is equality to talk about everything in America including Christianity,” Osborne said.

CBS46’S Mike Paluska asked Osborne if he would be willing to return to the school and teach only the curriculum and not talk about religion.

Yeah, he wants “equality” as if he’s not getting it already… He’s welcome to talk about religion. But that’s not what he wants to do. He wants special privilege to promote his religion. That’s not the district’s “politics.” That’s the law.

(Does anyone really think Osborne would support atheist and Muslim and Wiccan and Pagan teachers who wanted to preach to their students, too? So much for equality…)

As far as we know, he’s always been treated like all teachers — the classroom isn’t a place for them to discuss their political and religious views. He blatantly violated those rules and expected to get away with it because he’s a Christian. No surprise there.

He may have been a great teacher in other ways but that’s not the issue in question. He broke the rules once before, in 2012, and was given a brief suspension. It’ll happen again if he continues preaching. He can’t deal with that. So he left before they punished him.

Good for him. That’s exactly what needed to happen.

There are plenty of Christian teachers out there who are extremely devout. The vast majority of them understand that proselytizing has no place in school and they do the job they were hired to do. I have no idea why Osborne is unable to contain himself, but he’s showing us why he’s better suited for a job in a church or a private Christian school. (He’s considering becoming a youth pastor, which seems appropriate.)

What really doesn’t make any sense to me is why students are protesting. Osborne made this decision on his own, not because anyone forced him to do it. And even if the school did eventually punish him for preaching, they wouldn’t have been doing anything wrong. The fact that the students don’t seem to understand that is evidence that they should be going to their government classes instead of defending a teacher who’s willfully breaking the law (and one that makes perfect sense, no less).

September 10, 2014
Despite Pressure, Allegheny County Council (PA) Votes Against "In God We Trust" Display in Courthouse
Next Post

September 10, 2014 Incompetent Air Force Officials Are Asking the Defense Department Whether "So Help Me God" in Oath is Optional
Browse Our Archives
What Are Your Thoughts?leave a comment