Last December, the New York-based Satanic Temple made nationwide headlines when they said they wanted to donate a monument to be placed outside the Oklahoma State Capitol building, where a Ten Commandments monument already stood:

That was later followed by a request from a Hindu group that wanted to erect a monument of Lord Hanuman.

I’m sure more monument requests would have been made, but the Oklahoma Capitol Preservation Commission voted unanimously in December to declare a moratorium on other monuments. (Part of the reason for the halt was that they were still dealing with a lawsuit from the first one.)

This wasn’t just all talk on the part of the Satanic Temple. They even released the design of their proposed monument, featuring Baphomet:

They started building the display, too.

Here’s where things get even more interesting.

On July 30, the Satanic Temple (via the website MuckRock) filed an Open Records request with the Capitol Preservation Commission. They wanted:

The Commission was obligated to respond — and they eventually did.

Most of the documents are things like petitions to stop the Satanic monument (who cares — this isn’t a popularity contest), constituent emails (full of references to Jesus and words in ALL CAPS), internal emails concerning reporters asking questions about the monument, etc. Nothing too newsworthy.

But one piece of correspondence stands out. It’s between staffer Beverly Hicks and Capitol Preservation Commission Chair Trait Thompson (the guy in charge). It comes in response to one citizen’s threat to vandalize the Satanic monument if it ever goes up. You’ll want to read it from the bottom up: 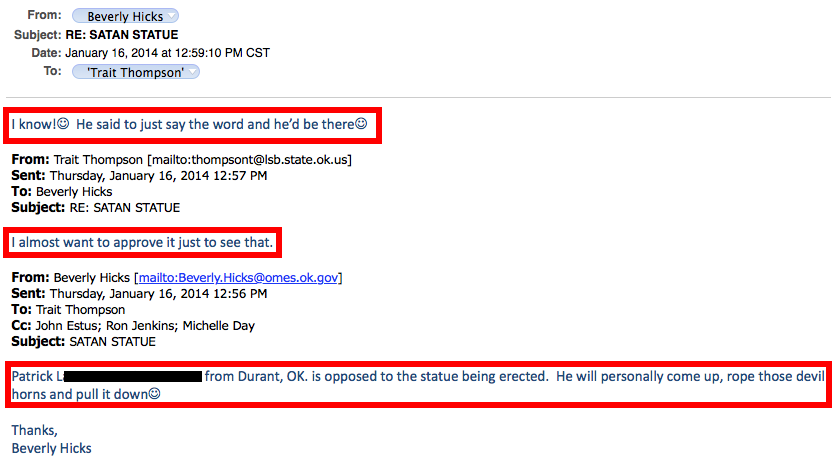 In case you missed it, that’s Thompson joking (?) about how he wants to approve the Satanic Monument just so Patrick can destroy it… followed by Hicks responding with a couple more smiley face emoticons.

There’s also another, more serious, problem. I asked Satanic Temple spokesperson Lucien Greaves what he made of the emails and files and he said he didn’t get everything he asked for:

While the documents we received are interesting, the paucity of inter-agency communication regarding our monument request raises suspicions that the agency failed to send us their full cache. What we find are mainly documents and communications related to media requests and citizen letters related to our proposed monument. It strikes us as extremely implausible that the Commission has absolutely no meeting notes or minutes related to our monument request, even as we see — from the documents we did receive — that the issue of our monument has been a primary issue for the agency for some time.

Reasonable suspicion aside, we do have one provable omission from the Oklahoma Capitol Preservation Commission documents: a letter we sent back in June requesting that they advise us on next steps, and apprise us of the status of our monument donation request, as the statue itself nears completion. The letter was sent via registered mail, for which we received proof of receipt… The Preservation Commission failed to reply to this letter which, again, they did not include in their assembled records to us. I personally feel it quite possible that the commission’s correspondence related to that letter (which rightfully should have been included in reply to our Freedom of Information request) would indicate a conscious and willful decision to ignore us (amounting to a de facto rejection of our monument request on viewpoint discrimination grounds).

He’s not kidding about their letter not being included in the document trove. Here’s the letter and the proof of receipt is below: 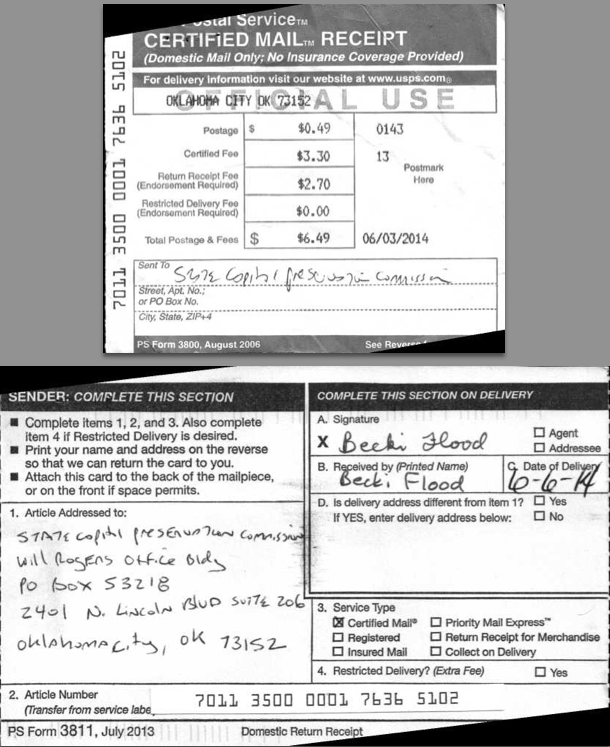 Greaves continued in his email:

Some may feel it would be unlikely — implausible as the apparent lack of internal communication regarding The Satanic Temple may appear — that Oklahoma officials would so flagrantly ignore the legal standards to which they are bound. I would remind them that this whole issue arose in response to Oklahoma representatives violating not only the Establishment Clause of the Federal Constitution, but directly violating their own state constitution as well, when they allowed a religious monument to be placed on State Capitol grounds.

Whether the 10 Commandments reflect one’s personal religious beliefs or not, every American should be offended when public officials overstep the boundaries of their authority. We should never allow the law to become malleable to the convenience of our elected representatives, regardless of whether the simple tribalisms they favor align with our own. The precedent in allowing such transgressions to go unpunished has disturbing ramifications for us all.

We will appeal the Oklahoma Capitol Commission’s reply to our request and, I suspect, if we end up embroiled in a lawsuit regarding our monument, the power of the subpoena may give us better access to that which has been withheld.

As it stands, the monument moratorium is still in effect and there’s no indication that the Satanic monument has been accepted or rejected. While the public may be overwhelmingly against it, their opinions are irrelevant. Legally speaking, the Commission can’t say yes to the Christian display and no to everyone else. If they’re covering up their discussions about the Satanic Temple, then they’re just adding another major problem to their growing list.

September 8, 2014 Fargo Officials Have Spent More Than $120,000 of Taxpayer Money to Defend a Ten Commandments Monument
Browse Our Archives
What Are Your Thoughts?leave a comment