In Galway, Ireland, a vaguely Christian volunteer group called the St Vincent de Paul (SVP) Society has given a grant to a local LGBT group. It’s meant to help them create an LGBT community resource center, a much-needed space in a traditionally Catholic area.

Local Catholic bishop Martin Drennan (below), however, has jumped in at the last minute to protest because he says building the center will hurt the poor and “send the wrong message” about Christian charities. 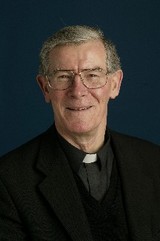 As a self-described social justice organization dedicated to fighting poverty, SVP’s primary function is to send volunteers to households that need assistance. The group gave €45,000 (more than $58,000) over three years to Amach LGBT Galway, a locally-supported community organization, to help build the LGBT center (and their contribution will only partially cover the costs). The grant was approved through a fund dedicated to the late Maureen O’Connell, a supporter who willed part of her legacy to SVP, and therefore not taken out of the group’s overall funding.

According to Jim Walsh, an SVP spokesperson, the donation “is a fraction of what the SVP spends in providing direct assistance to families and individuals.” He added that the donation was in line with SVP’s Christian ethos, which says is “to be non-judgmental when its assistance is sought.”

The decision to help Amach “was made purely on the basis of need in the Galway area, in the same way as all requests for support are assessed. It does not signify any other motive,” he said.

He also confirmed that the SVP had no formal association with the Catholic Church or its bishops but that “relationships at a local level were very strong with local clergy, very much involved.”

But even though there is no formal connection between them, Drennan, the Catholic Bishop of Galway, says the donation tarnishes SVP’s reputation and showed “poor moral judgement.”

Bishop Drennan said that “on moral grounds we can’t support that.” Homosexual activity was “in our eyes morally wrong behaviour and we cannot put funds at the service of what we don’t believe is morally incorrect.”

He appeared on a radio talk show this week to say he worried that “the poor of the city” would ultimately be harmed by the new LGBT center. LGBT people in Ireland are, in fact, more likely to live in poverty and less likely to have healthcare access than their non-LGBT peers, and also struggle to find health providers, counselors and homeless shelters that affirm and accept them. This is a trend in most, if not all, of the world, and it’s due mostly to the discrimination they face from all kinds of people. Extremely religious folks definitely included.

That doesn’t really matter to Drennan, though.

If it “supports an organisation we don’t agree with, we can’t support it anymore, that’s what I’m hearing,” he said.

So, to recap: Major, quasi-religious group identifies a need in the community. Group gives relatively small amount of money to local group to make it happen. Catholic bishop, who ultimately has no say in the matter, says you have to “judge the worthiness of the cause” before making this act of generosity, and defames Group.

Guess caring for the sick and poor only applies to straight people?

September 6, 2014
If the Duck Dynasty Guy Can't Convince Atheists To Watch the Left Behind Movie, Nothing Will...
Next Post

September 6, 2014 Non-Religious Students Make Up More Than a Third of Harvard's New Freshman Class
Browse Our Archives
What Are Your Thoughts?leave a comment